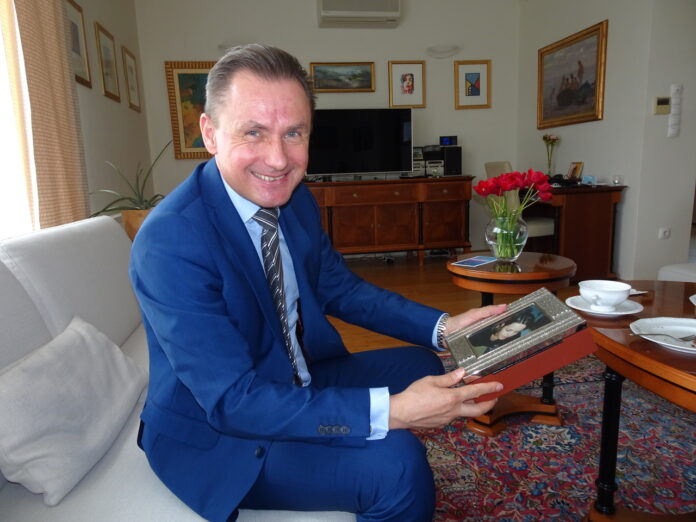 Farewell interview with H.E. Robert Kokalj, Ambassador of the Republic of Slovenia to Hungary

Your Excellency, how did Your bonds with Hungary begin?

– Let me start by mentioning that Slovenes and Hungarians have a lot in common. The language, of course, remains a barrier, but when it comes to mentality, I see quite many similarities between both nations. I think that in the career of every diplomat, some countries stand out, and in my case I can easily say that my Hungarian bond is the strongest.

In my youth, I was a ski instructor – this is how I met Klaudija, my future wife in 1993, and in the winter of that very same year it was Koreans that initiated my ties with Hungary. One day that winter the director of the ski school asked me on the slopes: “I have some foreign guests from Asia, please take care of them!” It turned out that they came from Budapest and that they were members of the Korean community, managers of companies operating in Hungary. Among them was also the Korean consul in Budapest. So, I started giving them ski lessons, and it was a great experience, because of their eagerness to master skiing. Soon a friendship developed. I first came to Budapest in 1994 at the invitation of the Korean consul.

When I started working at the Ministry of Foreign Affairs as a junior diplomat in 1995, my first boss sent me to Budapest to work in this Embassy during summer. After the two-month experience in Hungary, I was awarded a scholarship from then Open Society Institute for my post-graduate studies at the CEU. My Hungarian bond was re-established with the decision to relocate the Department of International Relations in European studies of the CEU from Prague to Budapest in January 1996. I spent another six exciting months in Budapest, which contributed significantly to deepening my bond with Hungary. I got married with Klaudija in 1998, we have a daughter and a son. We all feel at home here. During my professional career, I often returned here for various tasks in the area of migration and energy security.

You have succeeded in building excellent relations between the two countries. What are Your major achievements in Hungary?

– When you are building a relationship, there is always a personal touch to it. I am glad that I was able to establish such sincere and personal ties with many important stakeholders, both with officials as well as various public figures. It also needs to be acknowledged that there has been a very frank, close and friendly relationship between the two countries in past 30 years.

For a diplomat, especially a head of mission, it is a privilege, but at the same time a much greater responsibility to represent a neighbouring country – given the intensity, comprehensiveness and full diversity of our relationship.

I am leaving Hungary with a sense of accomplishment that relates in particular to advancement in economic relations. We have made progress in mutual investments, not only Hungarian investments of blue-chip companies in Slovenia, but also high-tech niche producers from Slovenia in Hungary.

During my past 4 years, the two neighbouring countries progressed in building physical links of infrastructure that has been lacking. Slovenia is now building a missing section of a high-voltage electricity interconnector, connecting the power grids of the two countries. We are also advancing in reaching the final agreement on a gas pipeline corridor connecting Hungary, Slovenia and Italy.

Important to mention that in these years – thanks to Hungary – the missing part of the M70 motorway was built. So today we have a fully-fledged highway between Budapest and Ljubljana, and as a matter of fact, even from Debrecen to the port of Koper.

The latter is not just a window for Slovenia, but for all Central European countries. It is in our interest to collaborate with the hinterland countries – Hungary included, in developing the relevant infrastructure that boosts regional trade.

What will You take with You as a memory?

– The memories are manifold and I will cherish them, but in comparison to most of my fellow colleagues’ ambassadors I am far better off. Namely, I can always easily come back in a blink of a moment. And I am sure I will return on regular basis. However, I will miss my Hungarian friends, and the vibe of this charming city, its cultural beat, its outstanding beauty, and features. I will miss its cosmopolitan nature. In particular, I will miss attending the events in the Liszt Ferenc Academy of Music and Műcsarnok. Budapest is so special, it is a blend of other major capitals. When you are in Budapest, you embrace the world.

What are Your experiences while working and living in Hungary as Ambassador of Slovenia to Hungary?

– I have to underline that my Hungarian counterparts have always been positively inclined to further strengthen our neighbourly relationship. There is a sense of mutual trust between Slovenia and Hungary, which in my view is perhaps best reflected by excellent military collaboration. After all, it is Hungary that guards the Slovenian sky with its fighter-jets. Recently, more than 150 Slovenian soldiers took part in the Black Swan 2021 regional special forces military exercise.

We also share a great responsibility in relation to our two minorities – the Slovenian minority living in Rábavidék and the Hungarian minority living in Muravidék. Their protection and well-being, their legal status in both countries has always been secured to the highest standard. I am pleased to say that their future development remains within the determined framework corresponding to high expectations of both sides regarding the protection of their national identities.

One of my priorities has also been to promote tourism flows between the two countries. During these years we have invested especially in presenting the Slovenian tourism potentials to Hungarian guests. I would like to emphasize that at least – until the outbreak of COVID-19 – the growth of Hungarian tourists coming to Slovenia was over 10% annually. It is now common to hear the Hungarian language, which is a melody to my ears, in all major Slovenian ski resorts, beaches and cities.

What will be Your next posting?

– I am returning to the Ministry of Foreign Affairs in Ljubljana. My next mission will be carried out in the area of multilateral affairs, more specifically in the field of international development cooperation and humanitarian aid. In this regard I am also looking forward to collaborating with the Hungarian side. I am confident that Slovenia and Hungary will work closely in their capacities as Presidency of the Council of the EU and V4 countries respectively. When it comes to our priorities and given many similar interests that we share, I look forward to Hungary’s support in implementing them.

As to the prospects of my next foreign posting I believe that once more unexpected can be expected. However, personally, after my postings in Europe and the Middle East, I hope for my next assignment to be in Asia.

What would You like to be if not a diplomat?

– I am an art-lover and when it comes to literature, fiction novels are ultimately appealing to me. While being tempted to write a fiction piece myself, I realized that until then photography serves as an adequate substitute because it is far less time-consuming. So in the course of the last decade a collection of landscape photos featuring the Middle East and Hungary emerged.

What is Your farewell message?

– The present time brings unprecedented challenges. We have to observe them carefully and learn to integrate them into our new realities. Even the nature of my profession is subject to a significant change. Nevertheless, like in any other profession one can only succeed and make a meaningful contribution with persistence, endurance and genuine enthusiasm.