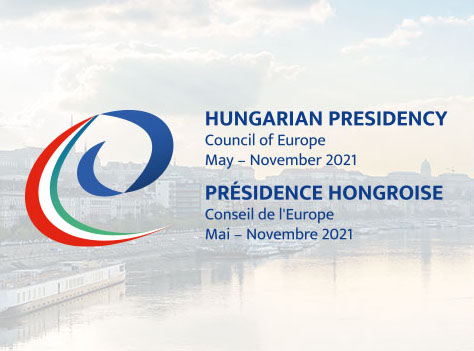 Hungary took over the rotating Presidency of the Committee of Ministers of the Council of Europe (CoE) from Germany, for the second time in the 30 years since its accession to the Strasbourg-based organisation founded in 1949. The Hungarian Presidency runs from 21 May 2021 to 17 November 2021.

Recalling the Council of Europe’s mission to build a freer, more tolerant and just society based on solidarity, common values and a cultural heritage enriched by its diversity, Hungary will seek to further promote and strengthen human rights, democratic values and the rule of law.

In this spirit the Hungarian Presidency will aim at continuing to consolidate the stability of Europe based on democratic institutions; seeking to strengthen the political, legal, social and cultural cohesion of our continent and combat the divisive factors constituted by political, cultural or religious intolerance and discrimination against minorities.

The Hungarian Presidency will focus on five issues:

Hungary intends to underpin its presidency priorities by offering a rich cultural program in Strasbourg in the coming months, when we can soon leave the constraints of the pandemic behind us.

The activity of the German Presidency:

Germany had the privilege of chairing the Committee of Ministers for the seventh time from 18 November 2020 to 21 May 2021. Being a full member of the Council of Europe for 70 years, Germany assumed the presidency shortly after commemorating the 70th anniversary of the European Convention on Human Rights on 4 November 2020. The promotion and protection of human rights, which is a key purpose of the Council of Europe and its organs, are of great significance for all the 830 million people in its 47 member states.

Germany has repeatedly highlighted the need for a future-oriented Europe, and this idea was reflected in the priorities of the German Presidency:

– Upholding human rights, democracy and the rule of law;

– Shaping the future by setting international standards for the regulation of Artificial Intelligence and protecting human rights on the internet by tackling online Hate Speech;

– Bringing CoE/Europe closer to the people by involving the public and young people in particular in a future-oriented debate about the above-mentioned topics.

Germany had a very active Presidency programme online, but its cultural events had to be limited due to the major impacts of the pandemic. However, four exhibitions were held in Strasbourg and Berlin.