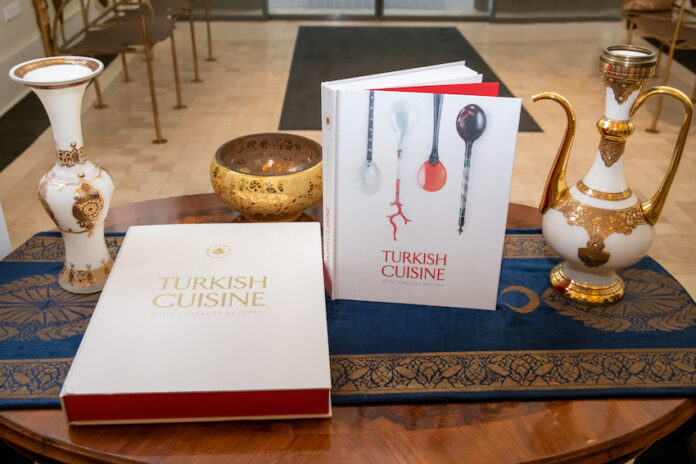 “Turkish Cuisine Week” – held under the patronage of the President of the Republic of Türkiye and led by President Recep Tayyip Erdoğan’s spouse, Mrs. Emine Erdoğan, and based on the gastronomy book “Turkish Cuisine with Timeless Recipes” (Asırlık Tariflerle Türk Mutfağı), published by the Ministry of Culture and Tourism, – has been celebrated in Türkiye and all over the world.

On the occasion of Turkish Cuisine Week, Mrs. Meltem Güney, Chargé d’Affaires ad interim at the Embassy of the Republic of Türkiye in Budapest, hosted a dinner at Matild Palace on the 25th May 2022,

At the event, sponsored by the Özyer Group, Mrs. Meltem Güney said that Turkish cuisine occupies a unique place in the world with its richness, traditional Turkish recipes are transmitted from generation to generation and the specialities such as babagannuş, oruk, künefe, lokum, kaymak and Turkish sausage are all under UNESCO protection. She also emphasized that all leftovers in Turkish cuisine can be transformed into completely different dishes using the zero-waste technique, thus contributing to sustainability, while their recipes have healing power, paying attention to the delicate balance of body and soul.

At the presentation of the book “Turkish Cuisine with Timeless Recipes”, Mrs. Güney stated that nowadays, as fast food culture spreads all over the world, this book is not just about recording old traditional recipes in their original form and making them accessible to future generations, but also the secrets of a healthy and waste-free eating culture. She added that work had begun on translating the book into Hungarian, allowing the unique flavours of Turkish gastronomy to spread widely on Hungarian tables.

The dinner, attended by more than 100 guests at the Matild Palace, was served with a selection of recipes from the book. The menu, prepared by Songül Coşkun, chef of the embassy, and Franz Pichler, famous head chef of Matild Palace, was very well received by the invited guests.

At the end of the evening, Mrs. Meltem Güney presented the book “Turkish Cuisine with Timeless Recipes” to Mrs. Anikó Lévai.

The evening ended with a classical music concert by pianist Ökaka Berkay.

Before leaving, guests were offered lokum, one of the traditional Turkish sweets.

Within the framework of Turkish Cuisine Week, a workshop on Turkish cuisine was held on the 27th May 2022 in cooperation with the Embassy and the Yunus Emre Turkish Cultural Institute.

Source: Embassy of the Republic of Türkiye in Budapest