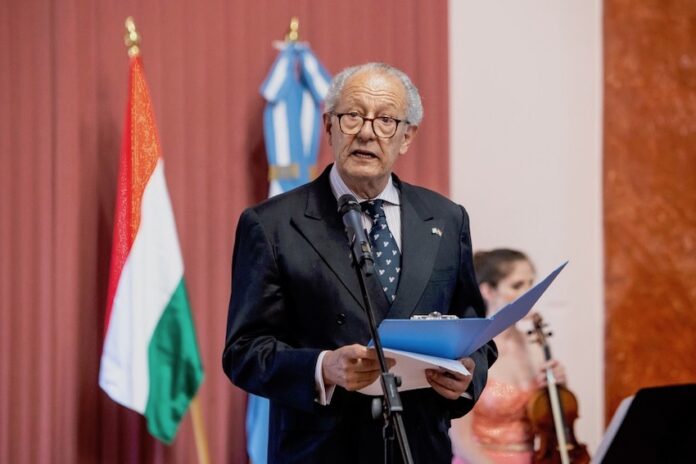 The National Day of Argentina, called as ‘Día de la Revolución de Mayo’ (Day of the May Revolution), is celebrated on the 25th May each year. Remembering the political events between 18-25 May 1810, leading to the May Revolution that helped Argentina achieve its independence and create a nation that did not exist up to then. 212 years ago, a group of men gathered in the city of San Miguel de Tucumán and made the bold decision to create a new state. This was made possible by the joint efforts, traditions and dreams of millions of people who migrated to this new country in Latin America from all over the world. Many of them were Hungarians who are now part of the Argentine society. Argentine culture has also been a blend of traditions from different origins and generations of people who had no common roots or memories. Tango is probably the most remarkable expression of this fusion.

To mark the National Day, the Embassy of Argentina hosted a reception at the Museum of Military History in Budapest, attended by representatives of the Hungarian political and social life, as well as members of the diplomatic corps and the Argentine community. H.E. Hernán María Patiño Mayer, Ambassador of the Republic of Argentina welcomed the audience and delivered his speech:

“Let me begin by thanking all of you for sharing with us the celebration of our National Day in 2022. Due to COVID restrictions, this is the first opportunity in almost two years since my arrival to Hungary, in which it has been possible to do this. I am very grateful to the Hungarian government for the free access to vaccines and the severe control measures that have been adopted to overcome the health crisis.

Painfully we are now facing another severe and dangerous crisis. This crisis proves once again that the disputes among the states have just one way to be solved peacefully: through politics and diplomacy. The use of force always shows the failure of the former and demands once again dialogue and the will of negotiation. In this regard, diplomatic action and good faith stand out as never before. If we honestly seek to overcome such a serious conflict as the one that is putting the future of all of us at stake, there is no other way. To this end, the parties involved must show a clear vocation for dialogue and negotiation. Under no circumstances should the counterpart be deprived of dialogue especially when this behaviour ignores decisions adopted by international organizations.

The current situation in UKRAINE is having negative repercussions throughout the world. One of the ways to contribute to this situation is to alleviate the suffering of the affected civilians through humanitarian aid and the readiness to receive refugees fleeing their country. In this respect, we applaud the quick reaction of the Hungarian government in opening its borders to the refugees.

This policy has a long tradition in the history of my country, which opens its doors to refugees coming from all over the world. You can be sure that Argentina will always extend its hands to the victims of any kind of persecution and violation of human rights wherever it comes from.

Now about our bilateral economic relationship with Hungary: for the first time in history, an Argentine company (GDM) made an investment of several million Euros in the field of biotechnology for the development of seeds, and started producing varieties of soybean seeds and other crops in Hungary a year ago, as a platform for export to the entire region. Argentina is currently boosting its exports of knowledge-based services. In this field, cooperation has enormous potential and this investment is a significant first step.