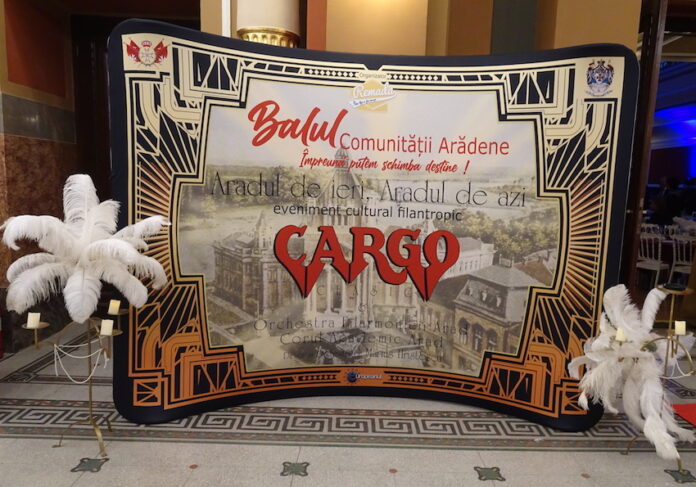 “Together we can change destinies!”

The Arad Community Ball has become a traditional event in the philanthropic landscape of Arad county in Romania, distinguished by its elegance and performance, once again highlighting the generosity of the people of Arad. The impressive Neoclassical building of the Cultural Palace, inaugurated in 1903 in the city of Arad, transformed into an amazing Gatsby style setting for the occasion – as a gratitude for the past and fascination for the present – was the venue of the Ball of Arad Community, which reached its third edition on the 22nd October 2022, organised by the Remada European Association and the Sovereign Templar Order of Saint Martin (OSTSM), Romania.

At the invitation of Sir Alexandru Tiberiu Dekany, H.E. Aurel Boit – Grand Master of OSTSM and his spouse Mrs Daniela Boit – a top organiser of the event -, a delegation composed of the members of the Sovereign Order of Saint John of Jerusalem, Knights of Malta, Federation of the Autonomous Priories (KMFAP), led by H.G. Prof. George Popper, Lieutenant General of the Grand Master, attended the philanthropic event in the spirit of the friendly cooperation and partnership that has been established between the two chivalric orders.

A delegation of French Templars from the city of Jouarre (situated in the Seine-et-Marne department of France), led by the mayor, Mr Fabien Vallee, also arrived to be present at this special occasion.

With the strong belief “Together we can change destinies!” the Ball of the Arad Community was marked by a series of nice moments called Love and Give – the awarding of almost 300 students from Arad who, through dedication, talent, serious studies and passion, achieved exceptional results in fields such as: sciences, language and communication, arts, sports, students from vulnerable social backgrounds who have obtained very good results during their studies and education, and all of them were entitled to receive a certain amount of bounty as a prize.

Awards were also given to outstanding citizens of Arad, who distinguished themselves in various fields of activity and represented their city with honour both locally and abroad over the years.

The artistic parts of the event were designed to highlight the young talents from the “Sabin Drăgoi” College of Arts in Arad, the X Style dance troupe from the Doma Art Style Association and students from the Faculty of Music and Theatre of the Western University of Timisoara.

The guests enjoyed very much the Fashion Show of sophisticated and extravagant evening gowns from Atelier Mirabel, designed by Mirabela Frai.

The award ceremony was followed by the most awaited moment of the evening: the concert of Cargo, a famous Romanian heavy metal band from Timișoara, together with the Symphony Orchestra and the Academic Choir of the Arad Philharmonic, under the baton of conductor Marius Hristescu. The musical idea was a project that combines classical music with rock music under the suggestive name Cargo – Classic. The Cargo band, accompanied for the first time by the Philharmonic Orchestra, the Academic Choir and the students of the “Sabin Drăgoi” College of Arts from Arad, performed well-known musical pieces from their own repertoire, that brought the entire audience to its feet, and rewarded the concert with unceasing applause.

It was a great evening in a joyful ambiance, congratulations!