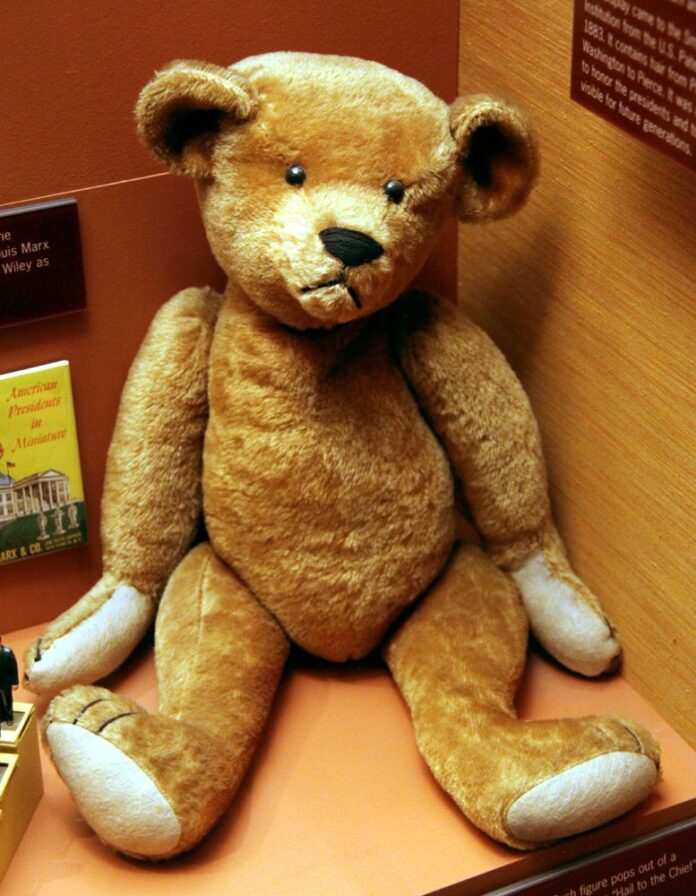 In the 1900 election William McKinley won a landslide victory and became the 25th President of the U.S., following a vigorous campaign for peace, prosperity and conservation led by Theodore Roosevelt, who took office as vice president in March 1901. But unfortunately, President Mckinley was assassinated in the same year in September, and consequently Roosevelt assumed the presidency at the age of 42, as the youngest person ever to become President of the United States of America.

In late 1902, a difficile year in office, the President decided to take a vacation – gladly accepting the invitation of Mississippi Governor Andrew Longino to bear hunting. The President arrived in Onward (Mississippi) in November with a crew of trappers, hounds, horses, and journalists, who were eager to watch the famed hunter in action. In addition, a local freed slave Hold Collier was the guide for the 10-day expedition. Roosevelt was a skilled and experienced hunter, but extremely impatient in finding the game. He wanted to see a live bear on the first day, but had no luck. To impress the President, Collier enlisted his dogs and picked up the scent of an old black bear. The dogs cornered the bear, but the bear fought back, killing some of them. Wanting to save the kill for the President, Collier tied the injured bear to a tree. When seeing the bear tied to the tree, Roosevelt refused to shoot, believing that killing a tied animal was unsportsmanlike.

The journalists immediately wrote to their respective publications, telling the story of Roosevelt’s compassion, and the news spread throughout the country.

On 16th November 1902, a Washington Post cartoonist Clifford Berryman poked fun at the encounter, publishing a political cartoon depicting Roosevelt sparing a cute baby bear. The cartoon became so popular that Berryman included the same little bear, he called “teddy bear” in his other cartoons during Roosevelt’s two terms of presidency.

As Berryman’s cartoon came out, a man named Morris Michtom got an idea. He and his wife, Rose, owned a small shop in Brooklyn, N.Y, selling handmade toys. On the night the cartoon was published, Rose fashioned a small plush bear out of velvet. The next morning, they displayed “Teddy’s Bear” in their shop’s window.

Surprisingly, many people wanted to purchase Rose’s stuffed animal. However, before selling it, Michtom decided to ask the president’s approval. The original bear was mailed to Roosevelt as a gift for his grandchildren with a letter requesting permission to use his name on the bear. Fortunately, Roosevelt consented and the popularity of Teddy’s Bear, later shortened to “teddy bear”, drove the Michtom’s to devote entirely to manufacturing stuffed bears and founded the Ideal Novelty and Toy Co.

Roosevelt adopted the teddy bear as the symbol of the Republican Party for the 1904 election. He never anticipated that such a fruitless hunt would become his most famous. Despite returning home empty-handed, Roosevelt continued hunting for the rest of his life.President Theodore Roosevelt won the 1906 Nobel Peace Prize for his role in mediating the Treaty of Portsmouth (1905), which ended the bloody Russo-Japanese War. He was the first American to receive this prestigious award, and used the money that he received with the prize to fund a trust to promote industrial peace.

Theodore Roosevelt emerged as a leader of the Republican Party and became a driving force for social reforms and anti-trust policy. His face is depicted on Mount Rushmore National Memorial in South Dakota (completed in 1941), alongside other great Presidents: George Washington, Thomas Jefferson and Abraham Lincoln.

Toymakers across America began selling versions of the teddy bear, that even gained rapid international fame. In 1903, the famous German toymaker Richard Steiff rebranded his company’s stuffed bears as “teddy bears” selling them in Germany. Within a year, toy stores across Europe were carrying Steiff’s products.

The Teddy Bear Museums in various countries await children and adults to learn about their beloved stuffed teddy bear and remembering their happy and carefree childhood: such as in US, UK, Japan, South Korea, Thailand, Germany and the latest one in Karlovy Vary/Czech Republic opened in 2015 showcasing more than 12,000 teddy bears.

Early teddy bears were made to look like real bears with extended snouts and beady eyes. Modern teddy bears have larger eyes and foreheads and smaller noses, baby-like features intended to enhance the toy’s cuteness. Today some teddy bears represent different species, such as polar bears, brown bears, pandas and koalas. Anyway it remains forever one of the favorit toys of children all over the world.