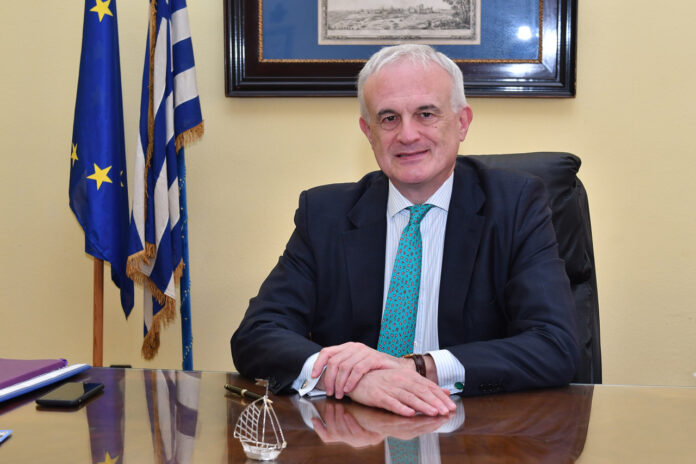 by Anna Popper, Senior Editor of the Diplomatic Magazine

Interview with H.E. Efthymios Pantzopoulos, Ambassador of Greece to Hungary

Your Excellency, in 2021 Greece will celebrate the 200th anniversary of the Greek Revolution. How are preparations for this significant event going?

The Greek nation has a long history of more than 3,500 years. The Greek Revolution of 1821 was a milestone in this long course, signalling the birth of the modern Greek state. The Revolution has been, in fact, the reflection of the values and principles not only of ancient Greece, but also of the Enlightenment and the American and French Revolutions. The determination for freedom, independence, democracy, against all odds, has been the fundamental value that inspired people. The first Constitution, promulgated by the Greeks in 1822, was extremely democratic and progressive for its era. We can say that the Greek Revolution influenced to some extent the revolutionary movements that swept Europe, especially the Central European nations, in the 19th century, being for them a source of inspiration and great expectations.

The challenge of the current pandemic does not offer the best conditions to fully celebrate such historic events. What is important is that the fundamental values spread by the Greek Revolution remain valid until today and inspire people around the world. We also promote these values within the framework of the current Greek Chairmanship of the Committee of Ministers of the Council of Europe.

What are the main achievements of Your country that You are proud of and the biggest challenges the Greek society is facing?

The achievements of Greece, which is the cradle of democracy and Western civilisation as well as the birthplace of the Olympic Games, constitute universal goods that are being cherished internationally. This is the first thing I will boast about. Furthermore, Greece has always participated in international efforts aiming at cooperation between the nations. Greece joined the NATO in 1952 and the EU in 1981. The modern Greek state hosted the first Olympic Games in 1896.

Greece continues to successfully develop and confront global challenges. The Greek people are trying to overcome the consequences of the severe economic crisis that hit the globe ten years ago and had a tremendous impact on the world economy. In recent years of «economic adjustment», the fiscal deficit was eliminated, the current account imbalance was considerably reduced and the overall flexibility of our economy increased.

Besides this crisis, our country was obliged, as the whole world, to cope with the fight against the coronavirus epidemic. However, we managed to become an international model in this fight; the Greek people showed a high level of individual responsibility and collective civil maturity during the pandemic. Of course the situation is still difficult. The competent Greek authorities make every effort to mitigate the consequences of this epidemic, which had a negative impact on the economy, as it happened in every country. As a result, output declined in the second quarter and unemployment increased. One of our biggest sources of national income, tourism, suffered a big blow. We hope that in 2021 tourism revenues will reach 50% of 2019. The Greek government is taking the necessary measures to minimize the social and economic consequences of the pandemic and alleviate the everyday life of the most affected people. Fiscal measures implemented and measures to increase liquidity in the real economy have reached, by the end of July, the total amount of €20,4 billion. By the end of 2020 the total will exceed €24 billion.

Having taken up Your post as Ambassador of Greece to Hungary in January, what are Your experiences so far? What are the most important historic bonds between the two countries?

After being informed that I would be the next Ambassador of Greece to Hungary, I was very pleased. Besides serving in a friendly country, that is a partner and ally, I was aware of the relations between Greeks and Hungarians over the centuries. Those relations date back to the Byzantine era. For instance, in the 12th century, the Hungarian princess Piroska, daughter of King Ladislaus I of Hungary, married the Byzantine Emperor Ioannis II Komnenos, thus becoming Empress consort of the Byzantine Empire with the name Irini and afterwards a Saint. St Margaret, whose name has the Danube island, was the daughter of Byzantine Princess Maria Laskarina and King Béla IV of Hungary. During the 18th and 19th centuries, many Greeks settled in Hungary, mainly with trade and economic activities. Baron Sinas contributed financially to the construction of the Chain Bridge and to the premises of the Academies of Budapest and Athens.

In more recent times, Hungary welcomed thousands of Greeks during the Greek Civil War (1944-49), who created the Beloiannisz municipality not far from Budapest.

The Greek community continues to thrive, being represented in the Hungarian National Assembly as one of the 13 officially recognised national communities in Hungary.

How do You see the current relations between Greece and Hungary?

The political and economic relations between Greece and Hungary are at a very high level. I am very satisfied to notice that the current year has witnessed dense bilateral contacts. The two Prime Ministers, Mr Orbán and Mr Mitsotakis, had a meeting in the margins of the recent European Council; Hungarian Minister for Foreign Affairs and Trade, Mr. Szijjártó, visited Athens in July and his Greek counterpart, Mr. Dendias, Budapest in October; Greek Minister for Migration and Asylum, Mr. Mitarachis, paid a visit to Hungary in August and had a meeting with the Hungarian Interior Minister, Mr. Pintér.

As far as bilateral trade is concerned, this is on an upward trend and between 2012 and 2019 its volume increased by more than 88%. The latest statistics indicate that the same trend will continue until the end of 2020. I’m confident that our bilateral relations will see further expansion.

I would like to add that tourism is also an important chapter of our bilateral relations. Greece became the second most attractive destination for Hungarians, after Croatia.

Regarding the EU, Hungary and Greece share the same or similar views on a number of issues, such as the importance of protecting the EU’s external borders, as we both have borders with non-EU countries.

What are the priorities of Greek foreign policy? In terms of its geopolitical importance, what role does Greece play?

Being on a strategic crossroad of continents and seas, Greece has always been a pillar of stability, always promoting the principle of good neighbourly relations even in times of crises. We strongly believe that respect for International Law and the resolution of any problem with diplomatic means constitute the only acceptable way to ensure peaceful coexistence in the international community.

Greece is a member of many international and regional organisations working for world peace and stability. Regarding regional collaboration, Greece cooperates with many countries in South-East Europe and the Mediterranean for enhancing political and economic cooperation. Greece, like Hungary, supports the European perspective of the Western Balkan countries.

Your Excellency, tell us please about Your diplomatic career. What do You aim to achieve during Your tenure?

I joined the Greek Diplomatic Service in 1983. Regarding my posts abroad, I have so far served at the Embassies in Tehran and Brussels, at the Mission to the UN in New York, the Embassy in Ankara and the Consulate General in London as Consul General. As Ambassador I have served in Astana-Kazakhstan (nowadays Nur-Sultan) and now in Budapest.

My aim is to promote the relations between our countries and peoples in every aspect. Of course the enhancement of cultural and economic relations is one of the main goals.

What leisure activities do You like after busy working days?

I believe Budapest is one of the most beautiful cities in the whole world. Its magnificent buildings, natural landscape and the Danube create a unique environment. I like to walk in the city, especially along the Danube.

Unfortunately, due to the pandemic, I have not had the opportunity to travel much in Hungary yet.

In this very tough period, what are You the most optimistic about as You look forward?

I hope that scientists will succeed to develop a vaccine or medicine against the coronavirus so that people can continue to create and dream. Needless to say, this can only be achieved if peace prevails around the world.