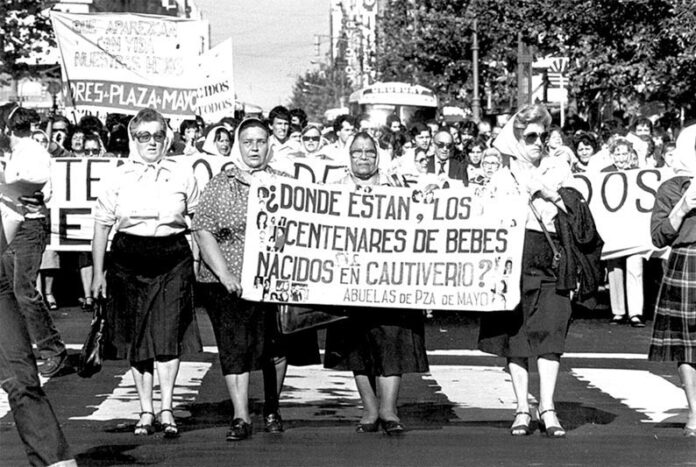 In October 1976, just seven months after the coup d’état, the Argentine people should have democratically elected their new authorities, maintaining the country’s institutional stability. That would have avoided the most painful and criminal process of extermination in Argentina’s political history.

This civil-military coup would be unprecedented in the history of Argentina. The military in power would push perversion and cruelty to inconceivable limits. From the outset, the dictators decided to install a regime of terror and concealment that would sow social panic while avoiding international pressure to repudiate and condemn their dictatorial behaviour.

A war against the guerrillas was a guise to exterminate the opposition, especially the left wing of the Peronist party. Thousands of exiles, from artists, writers and musicians to intellectuals and democratic political leaders, fled the country to avoid being assassinated.

The regime’s true intentions were cleverly hidden behind this so-called “dirty war”. These intentions were to subject the people to authoritarian arbitrariness and to allow the installation of an economic model of concentration of wealth, foreign debt and widespread impoverishment, especially of the most vulnerable social sectors.

This so-called “Proceso” led to the disappearance of 30,000 people who were detained, tortured and murdered with the sinister intention that their bodies would never be recovered. Today we are still looking for the remains of many of them.

The leader of the criminal gang that took over the government in March 1976, referred to those people who had disappeared in a repugnant manifestation of cynicism and cowardice “…the number of people who disappeared is unknown, they are neither dead nor alive, they are people who have disappeared and have no entity…”. He never thought he would be put on trial and then imprisoned for the rest of his life.

They even reached unprecedented levels of barbarism. Women, who were pregnant at the time of their arrest, were held in inhuman conditions until childbirth. Just hours after delivery they were separated from their babies, drugged with pentothal and thrown alive from airplanes into the middle of the sea.  The newborns were appropriated by the same oppressors and murderers of their parents, and given to other members of the armed and security forces, or to families who adopted them without knowing their origin, without asking questions or complying with the due legal procedures.

THE MOTHERS OF THE PLAZA DE MAYO

This kidnapping and disappearance of tens of thousands of people provoked a phenomenon that was unprecedented worldwide. On 30th April 1977, a group of mothers decided to start regular meetings to demand that the authorities within the dictatorship inform them where their abducted sons and daughters were being held.

The first meeting took place in the Plaza de Mayo, the public square in front of the Government House, where there were historically large popular gatherings questioning or approving government decisions. In fact, two decades earlier, on 16th June 1955 in an attempt to overthrow the constitutional government and assassinate the president, Juan D. Perón, the Navy and Air Force planes had dropped bombs on this very same area. On that day, 400 people were killed and over 900 injured and maimed. An unprecedented act of bombing of an open public space in peacetime. Three months later, Perón was overthrown and began his 18-year exile.

The same Plaza de Mayo was chosen by the Mothers to confront the dictatorship that had kidnapped their sons, daughters, grandchildren. The mothers met weekly and marched to demand the alive reappearance of their missing loved ones.

THE GRANDMOTHERS OF THE PLAZA DE MAYO

Shortly after the public appearance of the Mothers of the Plaza de Mayo, other women joined their weekly protests. Mothers who also knew that their daughters or companions had been abducted during pregnancy and had not heard of them or their grandchildren since. This group of mothers, who had suffered the double loss of their sons and daughters and at the same time the complete lack of information about what had happened to their grandchildren, bravely faced the enormous risks of the tyranny’s brutal repression by publically airing their grievances and supplicating the release of their relatives.

Since the restoration of democracy in 1983, these Grandmothers have embarked on a laborious and painstaking search for these grandchildren, and to date have managed to recover 130 of them. Examination of the genetic data has made it possible to restore these people’s true identity.

The Grandmothers believe that around 300 victims of this horrendous baby-theft, who are now over forty years old, are still unaware of their true identity.

This “being in the dark” in fact turns this evil into a crime that continues to be perpetrated day by day. As is the case of those who disappeared without a trace and whose remains have never been found, the identity of a human being is gone forever.

The Grandmothers have been acknowledged worldwide for their courage and tenacity. They have been nominated for the Nobel Peace Prize eight times, and today many young people have joined their movement to ensure continuity in the efforts of these women who have achieved so much. By confirming with 130 recoveries that there was a systematic plan for child disappearances, they relentlessly strive on to find the other 300 who had been victims of identity theft and had been denied the right to have family memories.

For all these reasons, the Argentine government, through the Ministry of Foreign Affairs, in association with the Grandmothers of the Plaza de Mayo and the National Commission for the Right to Identity, has launched via all its embassies around the world the campaign “HELP US FIND YOU – ARGENTINA IS LOOKING FOR YOU”. Anyone, who has doubts about his or her family origins and was born between 1974 and 1983, can present themselves to any Argentine representations to confirm or rule out the possibility of being a victim of this terrible crime against humanity. Finally, we reaffirm the underlying premise that has identified the entire process of trial and punishment of those responsible for the tragedy in my country. MEMORY in order not to forget and honour the victims of state terrorism. TRUTH to know what their final fate was, JUSTICE so that those responsible for these crimes are brought to justice and, if necessary, duly sentenced with all the guarantees that Argentine democracy ensures. The trials held in Argentina have no precedent anywhere in the world in similar circumstances.