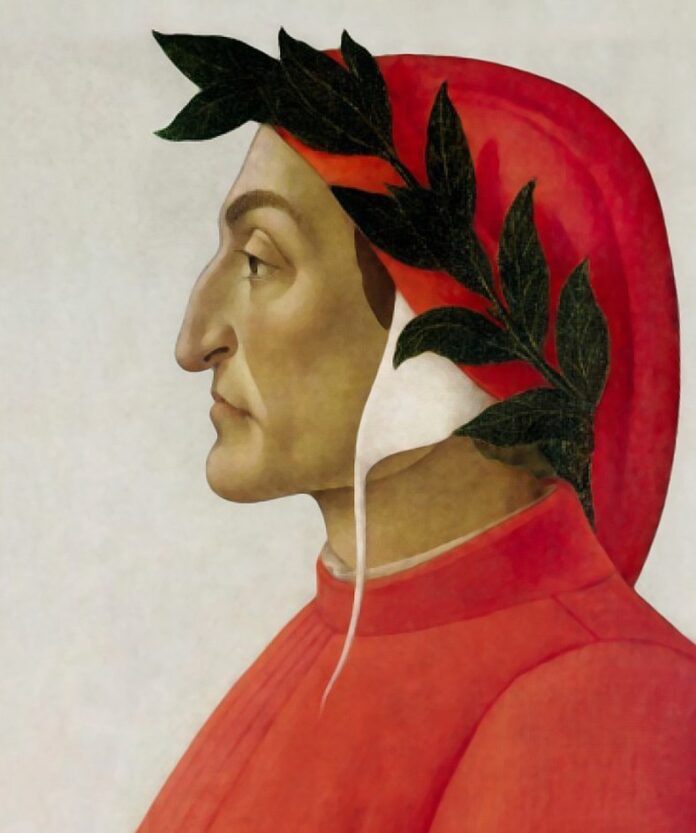 We Celebrate a Poet for Europe in 2021

Written by Dr. Gian Luca Borghese, Director of the Italian Institute in Budapest

Those who have been distinguished by the superior Nature for the love of truth must show they have this at heart above all, just as they profited from the efforts of the ancients, they also work for those who come after them, so that posterity may profit from them too. Undoubtedly, they fail in their duty, first drawn abundantly from the common heritage, then completely disinterested in the idea of contributing something to the community: They will not be the trees along the rivers that in due time bear fruit, but rather a deadly chasm, always swallowing up and never returning anything, so expresses Dante at the beginning of his work De Monarchia his scruples about the task of the intellectual.

Seven hundred years after his death, his work remains fundamental and relevant for us as European citizens of the 21st century. The ancient tree, under its foliage, shows an intricate and immense structure: while the roots lie in the past, the tallest branches continue to bear fruit for the future. The Divina Commedia is a “world-class work” that expresses and transmits a rich European multicultural tradition. Though a product of its time, the horizon of the Commedia embraces a culture that includes classical Greek-Latin culture, from Ptolemy to Virgil, troubadour poetry and the Byzantine art of Ravenna, as well as a certain Christian theological pluralism for Islamic eschatology and mystical Judaism. Dante presents European culture in a very personal yet universal way through the voices of characters from diverse backgrounds that he meets along his path, with some even expressing themselves in their own language, like the Occitan poet Arnaut Daniel in the XXVI canto of the Purgatory. This united Europe of the Spirit goes from the Hellespont to the Pillars of Hercules, is bathed by the Mediterranean and extends geographically and culturally to the Hyperborean regions. Its complex intercultural pluralism exists even while containing inherent tensions and contradictions. In its “European” dimension Dante’s cultural horizon as a poet, historian, philosopher and theologian has its iconic representation in the fourth sky, the sky of the sun, with the congregation of wise human beings, whose wisdom lighted the way for other virtues, “mystics and rationalists, humble friars and scholars” who lived between the 4th and 13th centuries and came from various European countries.

With his treatise De Monarchia, Dante confers a supranational, universalistic political framework to this European multicultural reality, with the two suns jointly representing political and spiritual power. While allegorical, this political organization is also concrete and specific, as it contains within itself a myriad of different languages and subjectivities, the reflection of the political reality of Dante’s time. This Dante’s dream is the image of a supranationally united Europe, which, however, contains and respects the inherent differences. Dante hopes that one day hatred will subside and that all cities of Italy will live in constructive peace and all nations of Europe will unite in knowledge and virtue, achieving the “universal peace” described in his Convivio. As many of his knowledgeable readers and commentators have pointed out, Dante’s vision is a European future. For Thomas S. Eliot “Dante is the most universal poet who wrote in a modern language. Dante, despite being Italian, is primarily European”. According to Osip Mandel’štam it would be “unthinkable to read Dante’s canti without referring them to the present” because they are “braced to perceive the future” (Conversazione su Dante, 1994). For the Russian poet, not only is the Comedy not conceived for Dante’s present, but Dante himself is never modern for anyone; he is rather a precursor, always looking to the future: «Dante is anti-modernist. His contemporaneity is inexhaustible, incalculable and inextinguishable». The Albanian writer and poet Ismail Kadare argued in his essay on Dante: “Our planet is too small to afford the luxury of ignoring Dante Alighieri. Escaping Dante is as impossible as escaping one’s conscience. No other literary creation places human consciousness, or rather its sunsets, to such an extent in its epicentre” (Dante, l’incontournable – Ou Brève histoire de l’Albanie avec Dante Alighieri, 2006).

We therefore take the opportunity of the VII Centenary of the poet’s death to re-read his work not only as the North Star of Italian literature, but as the mirror of what the European conscience has been able to transmit over the centuries, from poetry to political thought and from linguistics to religion. And time is no object for the reader, it springs out directly from reading Dante’s masterpiece: “The Divine Comedy does not so much take up the reader’s time as augment it, as if it were a musical composition being performed. As it becomes longer, the poem moves further away from its end, and its very end comes unexpectedly and sounds like the beginning” (Osip Mandel’štam, Conversazione su Dante).

Snippet from FEMERAID International Air Rescue as of 14 January 2022

January 7, is the date of Orthodox Christmas