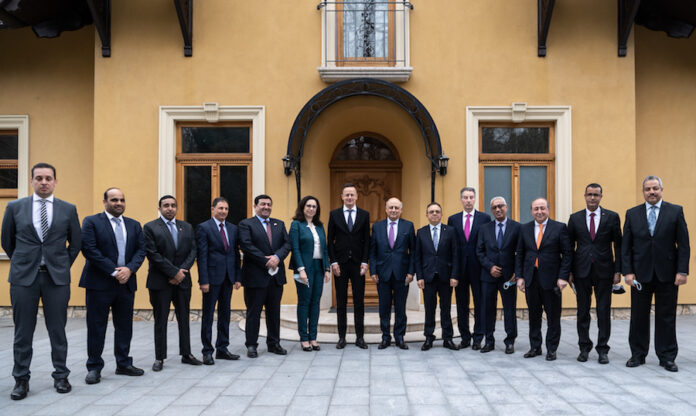 In the framework of activities and meetings organised by the Council of Arab Ambassadors accredited to Hungary and Hungarian high officials, a working lunch was hosted and chaired by H.E. Karima Kabbaj, Ambassador of the Kingdom of Morocco, Dean of the Arab Ambassadors’ Council on the 18th March 2021, at the ambassador’s residence, attended by H.E. Mr. Péter Szijjártó, Hungarian Minister of Foreign Affairs and Trade.

The meeting, held as the world struggles to overcome this unprecedented health crisis from COVID-19, provided an opportunity to review the financial, economic and social impacts of the pandemic and to explore new perspectives for partnership to improve resilience and economic growth, especially in the post-COVID era.

It was also an excellent occasion to discuss political issues of common interest between Hungary and the Arab world and to exchange views on Hungarian foreign policy towards the Arab countries, while looking for ways to strengthen cooperation between the parties in various fields.

At the same time, it was highlighted that despite the negative impact of the pandemic on world trade, commerce and trade between Hungary and the Arab states is constantly growing and exceeds $ 1 billion.

Minister Szijjártó announced that the Hungarian Eximbank had provided a credit facility to foster economic cooperation between some Arab states and Hungary. In this line, it was agreed that Budapest would soon host the 3rd Arab-Hungarian Economic Forum, following the one in Saudi Arabia in 2014.

During the meeting the Council reiterated the importance of Hungary’s support for maintaining stability in the Middle East and North Africa, which is essential for the European neighbourhood. Stability that can only be achieved through a just and lasting settlement of the Palestinian cause, the restoration of peace in Yemen, the promotion of stability in Libya and the rejection of foreign interventions in various conflicts in the Arab world, as requested particularly by the Arab League.

Regarding the pandemic, the working lunch was a good opportunity to share the status of the vaccination process in Hungary and to underline the country’s measures in handling the consequences of COVID-19 in order to protect the Hungarian economy and save jobs.

During the talks between Minister Szijjártó and the Arab Ambassadors present, the attention was drawn to several issues, namely the need to launch a strategy focusing on the Arab world, following the one launched by Hungary with Africa and Latin America, and the importance of organising the 3rd session of the Arab-Hungarian Economic Forum in 2022.

The Council also praised Hungary’s commitment to peace and stability in the MENA region, the Sahel and the Mediterranean, and called for more attention to this area by the European Neighbourhood Commissioner.

The importance of strengthening cooperation between Africa and Europe to counter the security, economic and health challenges of the pandemic was pointed out as well.

The Council seized this occasion to thank the Minister for Hungary’s efforts in the fight against terrorism in the MENA region, for its support in organising Pope Francis’s visit to Mosul (Iraq), for its stance in favour of the two-state solution, stability and peace in the Middle East, for its financial support to protect Libya’s borders to combat illegal migration, for its rejection of all foreign interventions that could hinder the safety and stability of the Arab countries, and last but not least, they expressed gratitude for the scholarships offered by the Hungarian government to Arab students to pursue their higher education in Hungary.