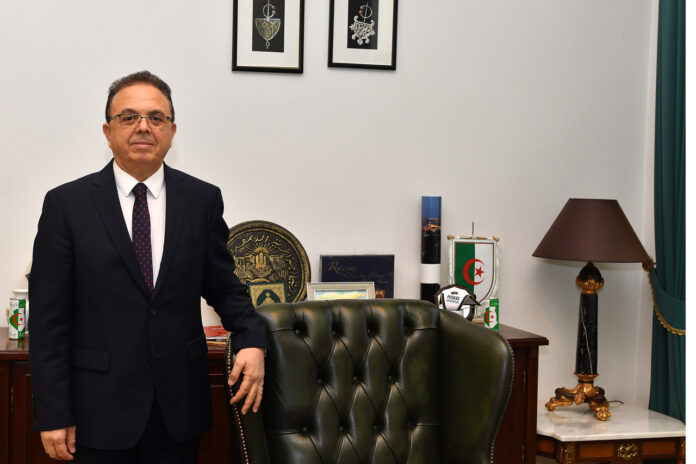 by: Anna Popper and published in the Hungarian Diplomatic Magazine

Interview with H.E. Mr Ali Mokrani, Ambassador of the People’s Democratic Republic of Algeria to Hungary

Your Excellency, after the first year of Your diplomatic mission, while living and working in Budapest, what experience did You? Did You have any contact with Hungary before this posting?

On the 27th November 2020, exactly one year has passed since I arrived in this beautiful friendly country, Hungary. Just like the Hungarian people and every other nation in the world, we are living the COVIC-19 pandemic in a state of alert, fully respecting the prevention and protection measures against human transmission, imposed by the Hungarian authorities in the first and current second wave of the epidemic. It goes without saying that this pandemic, which surprised us all, has reduced all diplomatic activities to a minimum level of action.

Before my arrival to Budapest, I already had contact with Hungary, as I was in charge of European Affairs in the Ministry of Foreign Affairs for more than 27 years.

Indeed, I kept relation with Hungarian representatives to the EU, the OSCE, the Council of Europe, the NATO – Algeria’s focal point to the latter is namely Hungary -, and to the Union for the Mediterranean (UfM), as well as within the framework of partnerships between the EU and the Maghreb, the Arab world and Africa given the fact that Hungary is an EU member state to which my country is bound by an Association Agreement.

How would You assess the relations between Algeria and Hungary? In which areas do You see the potential to enhance cooperation? It is well known that Algeria offers great opportunities in many fields.

The longstanding relationship between Algeria and Hungary has always been marked by the seal of friendship, solidarity and cooperation.

In respect to areas of cooperation, Algeria and Hungary have reciprocal potential and comparative advantages. There is a mutual political will to develop true, fruitful and mutually beneficial relations of cooperation and partnership. I mean, among others, in agriculture, water management, environment, health, conventional and renewable energy, the ITC sector and scientific research sectors.

The geographical location of the two countries is an additional asset in terms of reinforcing cooperative ties, in particular through the access that can grant Algeria to African markets and Hungary to Central European markets. The Algerian national flag carrier, Air Algérie, which provides a direct link between Algiers and Budapest, could serve as a connection between Central Europe and North and Sub-Saharan Africa.

The happily existing traditional friendship and cooperation between Algeria and Hungary were testified by the visit of the Hungarian Minister of Foreign Affairs and Trade, H.E. Mr. Péter Szijjártó in Algiers in October 2020 in the margins of which he met his Algerian counterpart, H.E. Mr. Sabri Boukadoum, and agreed to consolidate and further strengthen the cooperation for the benefit of the two friendly countries by signing four memoranda of understanding in the fields of higher education, vocational training and archives, and also agreed to promote economic relations.

Would You please describe the political-economic situation in Your country?

The Algerian people, celebrating the National Day on the 1st November 1954, the date of the outbreak of the national liberation struggle from French colonialism, will never forget the Hungarian support illustrated by the Radio of Budapest broadcast on the Algerian Revolution in 1956, the press articles of the late journalist Alajos Chrudinák, and the medical and humanitarian help and care granted to Algerian fighters, without forgetting the friendly football matches between the National Liberation Front and its Hungarian counterpart team, in Hungary.

Algeria is now living a new era, marked by a change of government for more democracy, human rights and social inclusion. This New Algeria solemnly committed itself to holding a referendum on the occasion of the 66th anniversary of the 1st November 1954, which resulted in the adoption of the Revised Constitution initiated by President H.E. Mr. Abdelmadjid Tebboune, serving as a foundation of the country’s agenda for political and economic reforms.

What are the most significant achievements of Your society and the major challenges facing Algerians today?

The main achievements of Algeria’s 59 years of independence from 1962 up today are human development through the generalization of free education, the access to healthcare for everyone, universities in the country’s 48 provinces, multipartism, stability and national reconciliation in the wake of the tragedy of terrorism in the 90’s. Just to illustrate: Algeria has achieved the second objective of the UNESCO’s Millennium Development Goals (MDGs), namely the scholarization, in 2020, more than 10 millions in school enrolment, being the first Arab and African country in the UNDP Human Development Index, which says that Algeria is on the right path to realize the Sustainable Development Goals (SDGs), seven of the objectives: eradication of poverty, good health, quality education, gender equality, clean water and sanitation, affordable clean energy, industry, innovation and infrastructure. More than two million Algerian students are enrolled in universities. Algeria completed the construction of 3 million social housing between 1999-2019.

Regarding the foreign policy, what are the priorities of Algeria? What can the Algerian government do to reduce migratory flows to Europe?

The Algerian Foreign Policy draws its foundations from the national liberation struggle and from the principles of the UN Charter. Algerian diplomacy is oriented primarily on peace, development, mediation and defending people’s right to self-determination in accordance with international law, as its support for Western Sahara’s decolonization under the UN auspices.

In this chapter, Algerian foreign policy focuses on strengthening economic diplomacy and deploys all efforts to a peaceful resolution of Libya situation as it has done for Mali through Algiers peace agreement. Algeria supports the neighbouring sub-Saharan countries in developing and recovering stability and security with gesture of solidarity to face COVID-19 impacts.

Regarding immigration, Algeria as a destination for migrants, advocates a global approach for the treatment of root causes of this phenomenon, namely by the fight against clandestine migration and its connections with organized crime and human smuggling. All this, in the respect of human dignity, development and cooperation with countries of origin. My country has a law criminalizing migrant smuggling and has signed readmission agreements with the main destination countries for Algerians in the UE. There has been a good cooperation between Hungary and Algeria in this aspect.

Please tell us about Your professional-diplomatic career. What do You aim to achieve as Ambassador to Hungary?

I started my diplomatic career in 1984 and served as a diplomat in France, Vietnam, as Chargé d’Affaires in Belgium, as Ambassador in Zimbabwe, Zambia and now in Hungary, covering also Slovenia. My main goal is to contribute to the reinforcement of bilateral ties with particular emphasis on relaunching cooperation in all areas.

How do You spend Your leisure time after the busy working days?

I spend my free time with my family by making excursions to various regions of Hungary, I play sports and I like to read.

What would be Your message and wish for the New Year 2021?

My wish and message for 2021 is to see COVID-19 pandemic come to an end, people living together in peace and solidarity, and the economic recovering for our shared success. I would also like to express my best wishes of good health, happiness and prosperity for the friendly people of Hungary, the Diplomatic Corps and the Readers of Diplomatic Magazine in the New Year.

I’m pleased to extend my sincere thanks to Dr. István Fodros and his editorial team for this interview and wishing further success in their important informative mission. Happy New Year 2021!