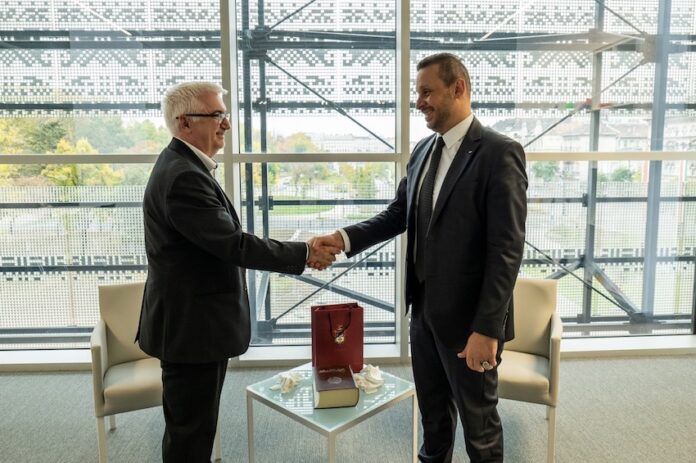 Palestine has registered its place in one of Europe’s most prominent museums, where a Holy Qur’an (Koran) from the Al-Aqsa Mosque in Jerusalem, Islam’s third holiest place, and a Holy Bible from the Church of the Nativity in Bethlehem were presented as contributions from the State of Palestine to the Museum of Ethnography in the Hungarian capital, Budapest.

The holy books of unique beauty and artistic value were handed over by the Palestinian Ambassador Dr. Fadi Elhusseini to Dr. Lajos Kemecsi, Director General of the Ethnography Museum.

“The Museum of Ethnography constantly treats its international relations with high priority. In addition to scientific cooperation, traveling exhibitions and conferences, diplomatic relations are also of great importance in the life of the museum”, said the museum director.

In turn, Ambassador Elhusseini said: “Our contribution to the Ethnography Museum comes in line with our deep belief that museums have a mission to carry a noble message of culture, and this contribution is a clear reflection of the rich history of deep-rooted relations between Palestine and Hungary.”

As one of the earliest ethnographic museums in Europe, the Ethnographic Museum of Budapest operates in a new building that was inaugurated in 2022 on the occasion of the 150th anniversary of this cultural institution.

Since its foundation in 1872, it has been collecting, archiving, protecting, researching and transmitting the traditional and modern cultural memories of the Hungarian, European and non-European communities. Thanks to its large collection of objects, images, texts, sounds and thoughts, the museum is a rich and inexhaustible source of learning about the world and serves as a starting point for understanding and respecting cultural memory and cultural diversity. In this endeavour, the holy books play an important role.

Source: Embassy of the State of Palestine in Budapest