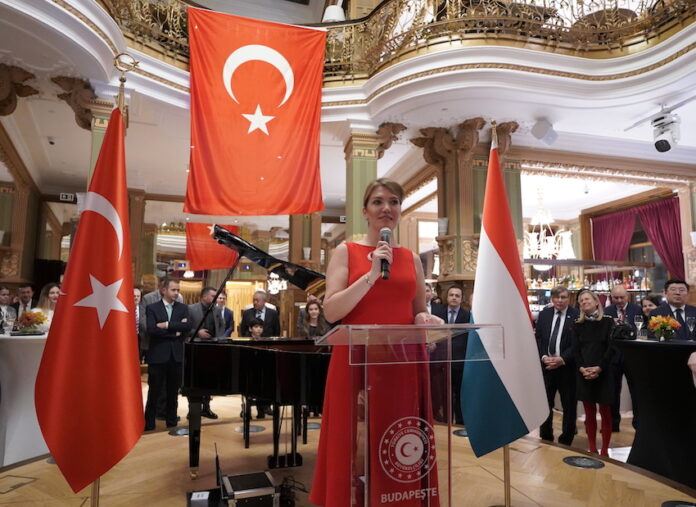 October 29 marks the victory of the Turkish nation’s war of independence and liberation from occupation, which opened a new chapter in the country’s history. On this day in 1923, Mustafa Kemal Atatürk proclaimed the Turkish Republic and the new country was recognised under the Peace Treaty of Lausanne.

On the occasion of the Republic Day, H.E. C. Gülşen Karanis Ekşioğlu, Ambassador of the Republic of Türkiye to Hungary hosted a grand reception at Matild Palace Hotel in downtown Budapest, attended by government officials, members of the diplomatic corps, representatives of the business, social, cultural, academic circles and Turkish nationals living in Hungary.

The event began with the national anthems of Türkiye and Hungary, then continued with the opening speech of the Ambassador, who greeted the guest of honour, Mr. Zsolt Bunford, Deputy State Secretary of the Ministry of Foreign Affairs and Trade. In her speech to the audience, dedicated to the anniversary, the Head of Mission said:

“I extend a warm welcome to all of you. Thank you for joining us today while we celebrate the 99th anniversary of the proclamation of Turkish Republic. The centenary in 2023 is only one year away.

The Republic of Türkiye was founded on 29 October 1923 by our great and visionary leader Mustafa Kemal Atatürk under extremely difficult circumstances. He believed that sovereignty must belong to the nation without any reservations or conditions. Freedom, independence and national sovereignty have become the three basic pillars upon which the newly-born Turkish Republic rests. Atatürk’s vision and principles still guide us and shed light on our future.

I feel privileged and excited to hold this celebration on the territory of an allied and friendly country. Our relationship with Hungary, which is deeply rooted in history, has evolved into a strategic partnership in the last decade. Today we are even closer allies, enjoying excellent political relations. We have been in close cooperation with Hungary in a wide range of fields including trade, security, defence industry, culture and education. But I believe there are also many untapped areas with great potential to be exploited.

2024 has been designated as Türkiye-Hungary Mutual Cultural Year as it marks the centennial of the establishment of diplomatic ties between the two countries. Hungary was among the first countries that signed a Treaty of Friendship in December 1923 with the newly born Republic of Türkiye. We are preparing an intensive program of cultural activities in both countries, which I am truly excited about.

I would like to express my deep gratitude to all our partners who contributed to the organisation of this evening and to our pianist Tuluğ Tırpan, who came all the way from Türkiye to conduct a musical performance in this special evening.

Likewise, all our volunteer students, citizens who helped us during the organisation, and my team at the Embassy, who took care of every single detail of our event.

On that note, I would like to thank you again for honouring us with your presence and for sharing this special moment with us.”

On 29 October 2022, Türkiye held a special celebration and made history by launching its TOGG car, the first electric car and the first ever Turkish-developed, Turkish-made vehicle by Türkiye’s Automobile Joint Venture Group (TOGG), which was produced by the Turkish car industry, near Istanbul.

Following the piano concert by the renowned pianist and composer Sabri Tuluğ Tırpan, playing various pieces, including from Aşık Veysel, the guests had the opportunity to taste specialities from the famous Turkish gastronomy.

Gazi Mustafa Kemal Atatürk died in 1938. On the 84th anniversary of his death on the 10 November, H.E. C. Gülşen Karanis Ekşioğlu, Ambassador of Türkiye commemorated the Great Leader of the Turkish nation with respect and gratitude, and placed a wreath at his statue, located in the 1st district of Budapest.