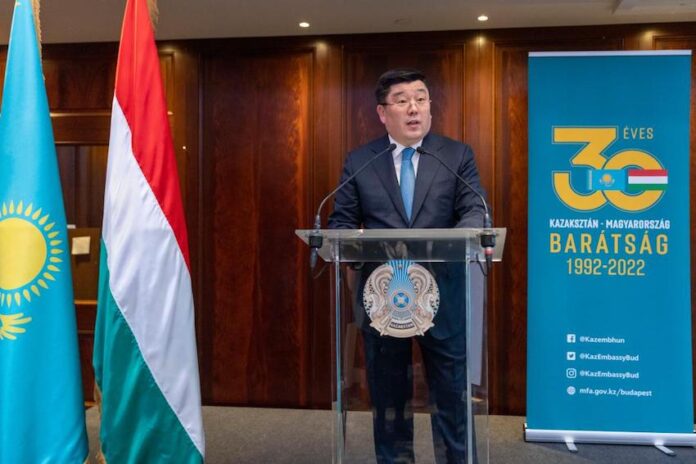 October 25 is one of the most important dates in the history of Kazakhstan. On this day in 1990 the country’s Declaration of State Sovereignty was adopted as a prelude toward its independence. Republic Day, marking the declaration adoption was celebrated in Kazakhstan until 2009. During the first National Kurultai (Congress) on 16th June 2022, President Kassym-Jomart Tokayev proposed bringing back the historical date and its annual commemoration. “Republic Day marks our ancestors’ dream for freedom,” said President Tokayev at a solemn ceremony, held in honour of the re-established holiday and of the Kazakh people’s efforts to gain freedom and preserve their national identity. The renaming of the Kazakh capital Nur-Sultan to the former name of Astana was also carried out on the initiative of President Tokayev as part of key changes.

On the occasion of the Republic Day, H.E. Zhanibek Abdrashov, Ambassador of the Republic of Kazakhstan to Hungary and Mrs Anel Akbergenova hosted a diplomatic reception at the Ritz Carlton Hotel Budapest, attended by officials from the Hungarian Government, the National Assembly, the Ministry of Foreign Affairs and Trade, members of the diplomatic corps, representatives of business, cultural, scientific, academic communities and Kazakh nationals living in Hungary.

The event started with the national anthems and followed with a spectacular short film about Kazakhstan’s most impressive achievements in various areas. Then Ambassador Abdrashov took the stage to deliver his remarks to the large audience:

“I am pleased to welcome all of you at today’s reception dedicated to the Kazakhstan’s Republic Day and the 30th anniversary of the establishment of diplomatic relations between the Republic of Kazakhstan and Hungary. I am delighted to greet the Minister of Finance of Hungary, Mr. Mihály Varga, and all our honourable guests, who have joined us tonight.

On 7th September of this year, the lower chamber of Kazakhstan’s Parliament – Mazhilis – approved the draft amendments reviving “Republic Day” on 25 October. This holiday was celebrated in Kazakhstan until 2009. The proposal to revive this important date was put forward by President Tokayev. He emphasised that the Declaration on the State Sovereignty was adopted on 25 October 1990, representing the country’s first step on the road to its independence. For the first time, the document enshrined statehood principles such as integrity, indivisibility, territorial inviolability, the development of the Kazakh people’s culture and language, and the strengthening of national identity. Kazakhstan’s Constitutional Law on State Independence, adopted on 16 December 1991, is based on this underlying declaration.

The year 2022 has brought a series of changes in the political life of the country. President Tokayev has introduced political and economic modernisation in Kazakhstan, as well as reforms in the field of human rights. The people of Kazakhstan have also witnessed the constitutional reform in Kazakhstan aimed at addressing modern global challenges.

A “special” referendum was held this summer, in which, for the first time in more than 30 years, people voted not for the expansion, but for the constitutional limitation of presidential powers.

During his State-of-the-Nation address, entitled “A Fair State. One Nation. Prosperous Society” and delivered on 1 September 2022, President Tokayev proposed to hold a snap presidential election on the 20 November 2022, while limiting the President’s mandate to a 7-year term without the right to be re-elected, which in turn would ensure the maximum focus of the Head of State on the strategic tasks of national development and significantly reduce the risks of monopolisation of power. Thus, the new presidential system will strengthen the political stability and sustainability of Kazakhstan’s model of social structure.

This year also marks the 30th anniversary of the establishment of diplomatic relations between the Republic of Kazakhstan and Hungary. In 1992, Hungary was one of the first ten states to recognise the independence of Kazakhstan.

In 1993, diplomatic missions of both states were opened in the capitals of the two countries, while the Embassy of Kazakhstan in Budapest became the first foreign diplomatic representation of independent Kazakhstan in Central and Eastern Europe. During this short period by historical standards, the two states have done a lot to strengthen and expand the multifaceted cooperation and have created effective institutions of interaction. Over the past 30 years, our partnership has become stronger than ever. We are proud that we have Hungary as our strategic partner supporting all efforts of Kazakhstan in the international arena.

As we look ahead to the coming decades, our continued close cooperation will allow us to address global challenges such as the COVID pandemic, food security and climate change. Deep cultural and historical ties uniting the Kazakh and Hungarian peoples play an important role in the development of cultural relations.

No matter what challenges emerge on our path, Kazakhstan always remains a reliable and consisted partner of Hungary. Thank you all for your attention!”

Ambassador Abdrashov thanked the Guest of Honour, Minister of Finance of Hungary, Mr Mihály Varga for his presence, who is also co-chairman of three interstate structures of bilateral cooperation: the Intergovernmental Commission on Economic Cooperation, the Parliamentary Friendship Group and the Strategic Council. In his speech, Minister Varga conveyed congratulations on behalf of the Hungarian Government to the people of Kazakhstan, expressed best wishes on the significant occasion of Republic Day, and praised the strong friendship between the two countries, which has stood the test of time and distance.

Hungary’s first freely elected government was among the first to recognise Kazakhstan’s independence in 1991, and the following year ensured the establishment of diplomatic relations. Kazakhstan and Hungary are strategic partners, the economic cooperation is getting stronger every year, the Minister stated. Trade between the two countries is growing every year, after a 27% expansion last year. Economic cooperation relates various sectors, such as agriculture, energy, renewable energy, finance, food industry and construction. Minister Varga stressed that the Central Asian country is a reliable partner in the field of energy supply, contributing to increase Hungary’s energy security.

“30th Anniversary of Diplomatic Relations Between Kazakhstan and Hungary” commemorative postage stamp was issued in Hungary.

The official part of the event was topped by a cake-cutting ceremony, followed by a reception, offering national specialities from the fine gastronomy of Kazakhstan and international dishes, which were highly appreciated by the invitees.

Source: Embassy of the Republic of Kazakhstan in Budapest

Watch the film about Kazakhstan: https://youtu.be/GKth5H4Uaoc