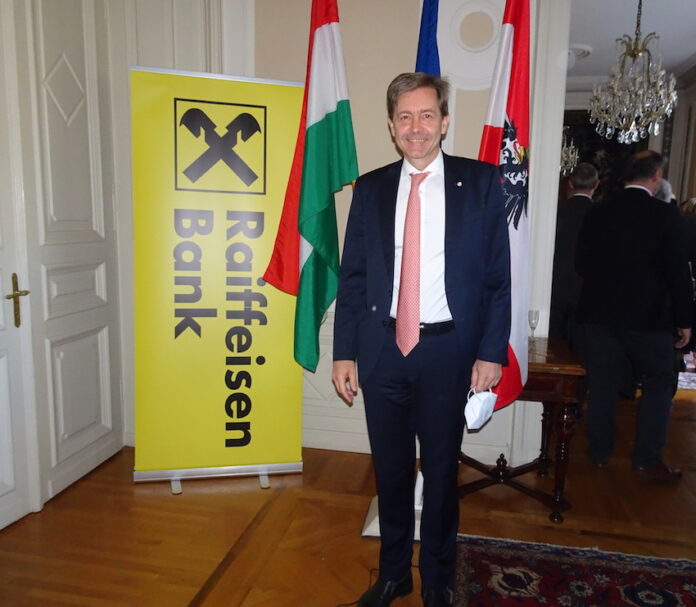 “The cooperation among neighbours is of outmost significance”

On the occasion of the National Day H.E. Dr. Alexander Grubmayr, Ambassador of Austria to Hungary and Mrs Dr. Bettina Fink hosted a diplomatic reception at the Austrian residence, inviting Hungarian officials, representatives of the economic and business sectors, cultural and academic life, members of the diplomatic corps and Austrian nationals living in Hungary. This year life returned to normal after two years of coronavirus mode, giving the possibility for free celebration.

The Austrian National Day (Nationalfeiertag) is marked annually on 26th October, the anniversary of the declaration of Austria’s perpetual neutrality by decision of the Austrian National Council in the form of a constitutional law in 1955. The State Treaty had been signed, restoring Austria’s state sovereignty and foreign troops were no longer allowed to be on Austrian territory. This treaty had to be ratified by all Allied signatory states (France, Great Britain, the Soviet Union and the United States of America).

Following the Austrian and Hungarian national anthems, the Ambassador delivered his speech dedicated to the anniversary:

“The Covid-19 pandemic has put a big strain on us over the past two years. When we thought that the stress would ease due to better immunity and vaccines allowing us to return to more or less normal lives, the Russian war of aggression against Ukraine brought us an even deeper crisis with terrible consequences in the humanitarian, energy and food sectors that cannot be assessed in their entirety yet.

The decision of the Austrian Parliament of 26th October 1955 on permanent neutrality is the basis for today’s Austrian National Day and a decisive factor in Austrian security and defence policy. At the same time, Austria – since its adherence to the European Union – takes part in the European Common Foreign and Security policy. And Austria is demonstrating its spirit of European solidarity every day since Russia attacked Ukraine in breach of international law. Let there be no misunderstanding, we are military neutral, but not ideologically, even less in front of fundamental breach of the Charter of the United Nations. This also means to counter the Russian narrative that the war is the fault of the west. And it is not the EU’s sanctions, but the Russian Federation that drives millions of people in need across the globe further into poverty and hunger and lets us feel the price increases.

As Austrians, we are proud of the humanitarian aid and the endeavours undertaken to ease the fate of the population of Ukraine. More than 80.000 Ukrainians have stayed in Austria since the Russian attack.

Austrian-Hungarian bilateral economic relations are strong, Austria being the second largest trading partner of Hungary and its third largest investor. Already last year I mentioned the ReFocus Austria program, an initiative taken by the Austrian government to strengthen Austria as a business location by helping Austrian enterprises abroad. Under today’s conditions of war-induced supply chain problems this solidarity with Austrian business is all the more important. Among companies of strategic relevance for Hungarian labour and employment, let me mention Rail Cargo Hungaria as a subsidiary of the Austrian Railway company ÖBB.

Looking at consular help to Austrians abroad, I would like to highlight a positive new development. We are able to welcome new Austrian citizens who made use of the new rule granting Austrian citizenship to direct descendants of holocaust victims, thus giving them back a part of their identity, which they were brutally deprived of more than half a century ago.

In the cultural area, I would like to recall that Austria – together with Germany and Switzerland – promotes German as a foreign language. A very successful example is the Wunderbar Fesztival. Other elements in these endeavours are the Austrian schools in Budapest, the Austria Institute and the partly Austrian-financed Andrássy University, the only university, teaching in German in a non-German-speaking country.

Let me also point out the excellent military cooperation in training police cooperation in the area of combatting illegal migration. Just three weeks ago our heads of government met with the Serbian president in Budapest to decide on strategies along the border between Serbia and North Macedonia.

I would also like to take the opportunity to thank the sponsors of today’s event, my sincere gratitude goes specifically to Raiffeisenbank, Aldi and Spar and to Mr Othmar Michl and all other Austrian enterprises that helped to make today’s reception.

My thanks also go to my wife, Dr Bettina Fink, who as a medical doctor has a job of her own but continuously helps me in my duties representing Austrian interests abroad. And I would also like to thank my deputy Min. Dr Waizer, Consul Gludovacz and the very committed staff members at our Embassy in Budapest, the commercial counsellor Schramel, the police attaché Dr. Herko, the military attaché Gen. Hanzl, the director of the Austrian Cultural Forum, Christian Autengruber, and the head of the Austrian Tourism Office, Oskar Peter Hinteregger.

Austria and Hungary are two states with a wide variety of historic, cultural and economic bonds. The pandemic crisis, but even more so the Russian war of aggression against Ukraine, has shown us that cooperation among neighbours is of outmost significance. I would like to thank Hungarian authorities for the high and efficient level of cooperation in many areas, I already mentioned some and may add the field of rescue cooperation, where a bilateral treaty is under way to facilitate cross-border rescue operations.

On the occasion of the Austrian National Day I would like to express my best wishes to you all, lots of success and good health. And especially with regard to the latter, I may suggest to spread out a little bit into the garden to follow COVID distancing principles. Thank you very much.”

The guests were invited to taste the Austrian and international food specialities and wines offered by the rich buffet, while enjoying the friendly atmosphere and the nice autumn whether.

Source: Embassy of Austria in Budapest