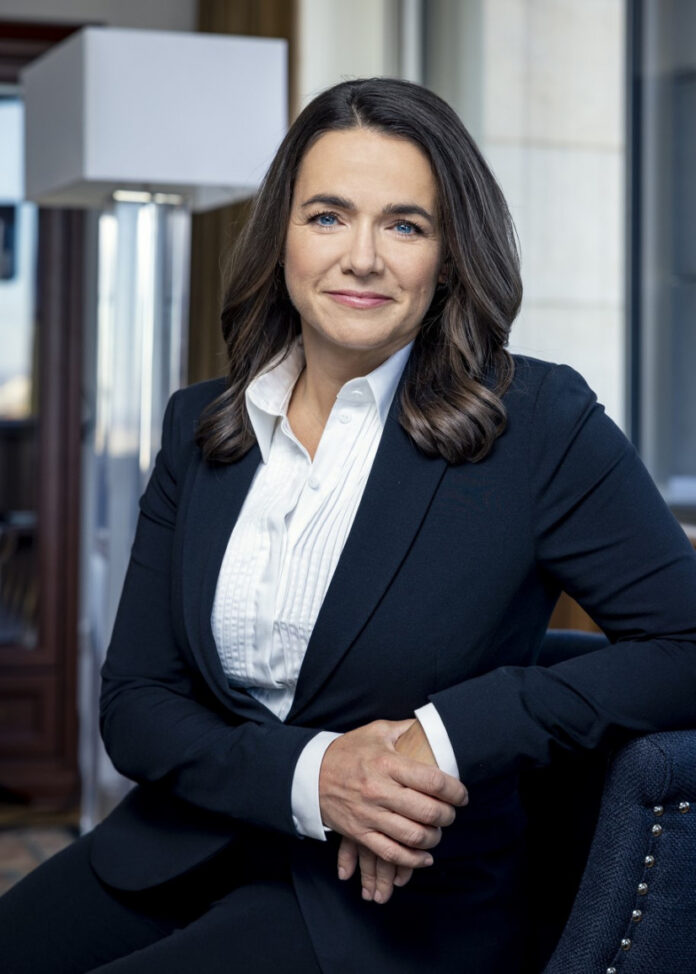 The Hungarian Parliament has elected Ms Katalin Novák, the first-ever female President of Hungary. The 44-year-old, youngest-ever head of state of Hungary took office on the 10th May 2022.

Before assuming this mostly ceremonial role, she served as a minister for family policy, portrayed her election as a victory for women. “We women rear children, care for the ill, cook, are in two places at the same time if needed, earn money, teach, win Nobel prizes, clean windows,” Novák said in a speech before the vote. “We know the power of words but can keep quiet and listen if we have to, and defend our families with a courage beyond that of men’s if danger threatens,” said the 44-year-old, Hungary’s youngest-ever head of state.

On 14th May 2022 the ceremony of inauguration began with an ecumenical service in the Kálvin Square Reformed Church, in Budapest., as a symbolic expression of the unity of the nation.

Then an act of the Ceremonial Inauguration according to the state protocol took place in Kossuth Square, in front of the Parliament building. The ceremony was also enriched by dance and music productions.

After lowering the historical flags, while the Central Orchestra played the first movement of the Suite by Frigyes Hidas, László Kövér, President of the National Assembly, came on stage and presented the decision of the Parliament on the election of the President of the Republic.

After taking office, as Head of State, Katalin Novák became the Commander-in-Chief of the Hungarian Army.

Following the military tribute and the hoisting of the Hungarian National red-white-green flag, the new President of the Republic gave a speech:

With gratitude in her heart she thanked her family and all Hungarians around the world for their trust. She promised to be the President of all Hungarians, as she also bears responsibility for those whose trust she has not yet won.

The President stressed that after the torments of the 20th century, the 21st century envisages a better, more beautiful, more peaceful, and safer life for the Hungarian people, but at the moment a dark cloud casts a shadow over the country, namely the war in neighbouring Ukraine. She said that since 25 February Hungary have received more than 700,000 Ukrainian refugees, and provided hundreds of millions of food donations for those left behind.

The President summed up her stance on the war in 10 points:

2. We forever say no to all efforts attempting to restore the Soviet Union.

3. We want peace in Hungary and in our neighboring countries. We want to win peace, not war.

4. It is not our war, but it is also waged against us. We demand the investigation and punishment of war crimes!

5. We are not neutral. We stand on the side of innocent victims and justice. We will fulfill our obligations as part of the EU and NATO.

6. We will not give up our sovereignty, which we have fought for so many times, under any circumstance,

7. We support Ukraine’s accession to the community of European countries.

8. Hungary is ready to make sacrifices for peace, but not to support decisions that would require greater sacrifices from the people of Hungary than they would cause pain to the Russian aggressor

9. We are prepared to participate in the peace negotiations between the warring parties.

10. We have insisted on securing the rights of Hungarians living in Ukraine, and we will continue to do so now and after the war.

In her speech, the President also announced her first trip to a foreign country, to Poland, to meet her counterpart Andrzej Duda on 17 May. She stressed her responsibility as President to show what Hungary means to her and what she thinks about Hungary’s place in the world.

President Novák stressed that national pride should not turn into national arrogance, nor should it become globalist cowardice. However, she added that the cradle of sovereignty is the family, where the unity of the nation begins. She stated that her commitment to her nation and homeland remains unchanged, and that she  also has a responsibility to Hungarians whose values differ from hers.

The President said that she wants to be an ear, a heart and a mouth for those whom we see, hear and understand less now. At the end of her speech, she thanked the organizers and artists for their contribution to the ceremonial event.

In the afternoon, an open house was held at the Sándor Palace, the official residence and workplace of the President of the Republic, located in the Buda Castle District, facing the Danube, to which Katalin Novák had cordially invited everyone in a Facebook post, and she welcomed more than 6,000 visitors, attending this unique opportunity.

Katalin Novák is the youngest president of Hungary, born on September 6, 1977, in Szeged. Her parents are medical doctors, just like her brother. She and her husband István Veres, an economist, have three children, Ádám, Tamás, and Kata. According to her CV, she speaks English, French, and German excellently, and Spanish at an intermediate level. She is an enthusiastic runner, she has already completed a marathon. She is a good skier, likes to bake, to go to the theatre and to the cinema. She has a passion for board games. A few years ago her family found a new companion in their adopted dog, Pogó.