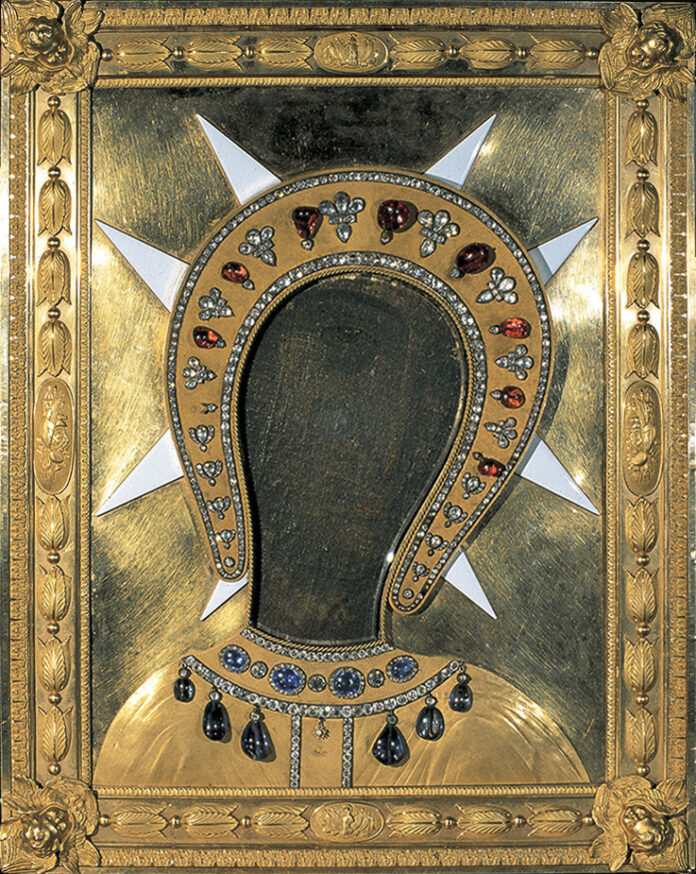 Celebrating the patroness of the Order of Malta, Our Lady of Philermos, H.E. Imre Gábor Ugron, Ambassador of the Sovereign Order of Malta to Hungary, and his spouse hosted a reception in the beautifully restored building of the Embassy in Buda Castle, attended by numerous ambassadors, members of the Order and high Hungarian officials, with the Guest of Honour Zsolt Semjén, Deputy of the Prime Minister.

In his address, the Head of Mission recalled the importance of the feast day and reported on the Order’s humanitarian activity:

“Welcome to our annual reception in honour of Saint Mary of Philermos, patroness of the Order, and thank you all for joining us in celebrating her name day. It was actually 8th September, however, the International Eucharistic Conference at that time took precedence.

The Sovereign Order of Malta has been active for over 900 years defending the Christian faith and helping the sick and needy, regardless of their beliefs, race or gender, in Hungary as well as in over 130 countries around the world.

In Hungary, the Order with its relief organization MMSZ (Magyar Máltai Szeretetszolgálat), led by Father Kozma, is the largest NGO. With circa 3,000 employees, it runs over 350 institutions. In addition, they take on and care for special service projects.

Let me give you a prime example. Two years ago, the Hungarian Government introduced a special project for social integration. The 300 poorest communities in the country were addressed, mainly in the Northeast, but also in the South. In these poor villages they have an average of 80% Roma population.

The MMSZ coordinates all efforts by pooling all available NGOs, religious organizations and associations into this work, all the while supporting them with know-how and experience. About 60% of the communities are directly taken care of by the MMSZ and the rest is handled by circa 20 organizations.

We know that the issue of Roma integration is extremely important. Our 30 years of experience in this field in Hungary has helped us achieve results. Our success lies in starting the work with kindergarten, then continuing through Elementary and High School. It is also influenced by the creating of employment and professional knowledge. Thanks to our coordinated efforts, we can show positive results with Roma integration.”

History of the Icon of Our Lady of Philermos

The icon of Our Lady of Philermos is the most sacred representation to which, for centuries, the Knights of the Order of Malta have been devoted and referring in the most difficult moments. It is the symbol par excellence of the Marian spirituality of the Order. Few religious pictures have travelled as much as this small but precious portrait of adventurous history.

In 1291 the Knights of Saint John were forced to leave Jerusalem. Then they occupied the island of Rhodes in 1309 and found a sanctuary with a deeply revered ancient icon of Our Lady on Mount Philermos, a popular place of cult. According to legend, it had been brought there by a pilgrim from Jerusalem around 1000 and was none other than the original portrait of Virgin Mary, painted by Saint Luke, the Evangelist, the first iconographer, around AD 46. (He is also said to be the author of the famous Black Madonna of Czestochowa.) The knights considered it a sacred relic that connected them to the lost Jerusalem.

Their devotion was deepened by wondrous occurrences such as the victory over the Turks in the 1480 siege, which they attributed to a miraculous appearance of Our Lady and St John. The invasion by the troops of Sultan Suleiman in 1523, led to the loss of the island, the Knights, when leaving, were allowed to take with them the Order’s most venerated and precious relics: a fragment of the authentic Cross of Jesus, the right hand of St. John the Baptist, and the icon Our Lady of Philermos, which by then was honoured as the patroness of the Order and of the Mediterranean. The icon of course went with the Knights of Saint John to Malta in 1530, and was housed in the St. John Co-Cathedral of Valletta, where it stayed for more than two centuries, enhanced with jewels. The icon went naturally with the Knights of Malta after the loss of Malta in 1798, and also accompanied them into exile. In 1799 the icon came into the possession of the new Grand Master, the Russian Tsar Paul I, and remained in St Petersburg through the 1917 revolution. Afterwards the dowager Tsarina Maria Feodorova kept it while she returned to her homeland, Denmark. After her death in 1928, the icon was taken to Berlin, then to Belgrade, into the care of King Alexander I of Yugoslavia, from where during the Nazi bombings of 1941 it mysteriously disappeared. Following long searches the icon resurfaced intact in 1997. Today this priceless relic is showcased in Cetinje, in the Montenegro National Museum.