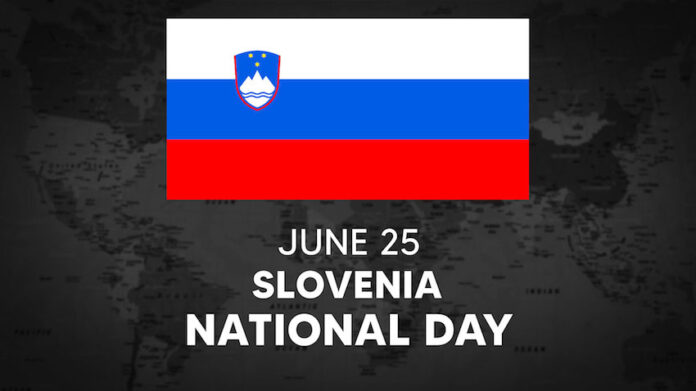 The Embassy of the Republic of Slovenia in Budapest hosted a diplomatic reception to celebrate Slovenia’s Statehood Day and the 31st anniversary of the country’s independence, as well as the 30th anniversary of diplomatic relations between Slovenia and Hungary. Statehood Day commemorates the country’s declaration of independence from Yugoslavia on the 25 June 1991, following the plebiscite held in December 1990. Representatives of the Hungarian political, business and cultural life, members of the diplomatic corps and the Slovenian community gathered at the Museum of Military History in Buda Castle at the invitation of H.E. Dr. Marjan Cencen, Ambassador of the Republic of Slovenia to Hungary and his wife, Lilijana Pogorevčnik Cencen.

In his speech, the Head of Mission greeted the attendees and the guest of honour: Mr József Magyar, Deputy State Secretary of the Hungarian Ministry of Foreign Affairs and Trade.

“Welcome to the reception on the occasion of celebrating the Statehood Day of the Republic of Slovenia. This year we are also marking the 30th anniversary of the establishment of diplomatic relations between Slovenia and Hungary. Immediately after my arrival to Hungary in June 2021 we were already busy with the EU Presidency, which prioritised resilience, recovery, digital and green transition, the Conference on the Future of Europe, the rule of law and the European way of life. We pointed out secure EU and the Western Balkans as well. We should also not forget that the Presidency was prepared in cooperation with Germany and Portugal. I am glad that here in Budapest we managed to organise meetings with Minister of Justice Judit Varga, Minister of Foreign Affairs and Trade Péter Szijjártó and State Secretary Dr. János Bóka. We held several cultural and social events, starting with a concert by the Slovenian Perpetuum Jazzile, one of the most spectacular and largest vocal groups in the world, and even a diplomatic run.

In parallel to the EU Presidency, we were also engaged in the Hungarian Presidency of the Council of Europe and V4, within which a series of events were organised, including visits at the highest levels. We were pleased to see the visit of the Slovenian and Hungarian Presidents to the Rába region, where the Slovenian minority in Hungary plays a stronger role; that Prime Minister Viktor Orbán visited Slovenia, and that Slovenian Prime Minister Janez Janša also visited Hungary, attending the Demographic Forum. We also exchanged several ministerial and other visits, which proves the lively cooperation between the two neighbours.

The area of Central Europe represents a natural geographical environment of the Republic of Slovenia, and therefore we are interested in maintaining steady relations with countries of this region in political, security, economic, cultural and all other areas of common interest. This is important especially now, when we are witnessing a terrible act of aggression in Ukraine that should not happen. Let me again express our solidarity with Ukraine.

Hungary is our neighbour, so we foster constructive and friendly relations in the spirit of open political dialogue and cooperation in various regional frameworks and international organisations. Slovenia and Hungary are members and thus allies in NATO, and members and partners in the EU, which further increases the possibilities for constructive cooperation. We also share our support for EU enlargement to the Western Balkans and an active role in the UN, where Hungarian diplomat Csaba Kőrösi was elected 77th President of the UN General Assembly, Slovenia is running for a non-permanent member of the Security Council in 2024-25.

Our two countries share mutual interest in deepening economic cooperation, strengthening transport and energy infrastructure, tourism, culture and cross-border cooperation, which is reflected in the dynamics of high-level visits and meetings. Economic cooperation between Hungary and Slovenia is fruitful, resulting in several large investments by Hungarian companies in Slovenia as planned investment of Pipistrel in Hungary.

The Slovenian and Hungarian minorities represent a strong bond between us. Their situation has improved in most areas over the last decades. One of the major steps was taken in February this year when an agreement on a joint fund for the development of Prekmurj/Muravidék and Porabje/Rába region for the next four years was signed. Overall, our two countries are a good example of treating national minorities, where, among others, both have their representatives in the national parliaments.

At the same time, a new program in the field of education, science and culture for the period 2022-2025 was signed. In addition, we have jointly organised a number of cultural events and festivals during the past year. I am glad that youth and sport cooperation is strengthening as well. We are also proud of several events that we have organised together with the Hungarian Ministry of Agriculture, the National Centre for Biodiversity and Gene Conservation to celebrate World Bee Day in 2022, observed on 20 May, since 2018, by the declaration of UN General Assembly. You have a chance to see an art exhibit created by Kids Kiosk kindergarten to honour the importance of bees and beekeeping.

It is impossible to talk about current issues without addressing the pandemic that has profoundly changed certain aspects of life and business. However, every change can be both a challenge and an opportunity. And I believe that for a small and adaptable economy like Slovenia’s, this is a reason to implement changes and modernise the economy, which will allow us more green and efficient production while at the same time a better life-work balance. According to The Economist and OECD,Slovenia successfully handled the economic challenges of the pandemic. Now, the new Slovenian Government has put out carbon neutral energy production and green transition into the forefront of its political program, which is a crucial orientation on our way to build environmentally friendly society that will provide an opportunity for a prosperous life of a young generation.

Let me thank our partners who helped us to carry out today’s reception: Cvitanič vinery, Šonkaš and Model Farm Gornji Senik, musicians Cita and Jože Galič, who will conjure up a pleasant atmosphere with typical Slovenian music, and my colleagues at the Embassy, without whom this kind of project could not have been carried out. Thank you!”

The guests enjoyed the friendly atmosphere, the Slovenian specialities while listening Slovenian music.