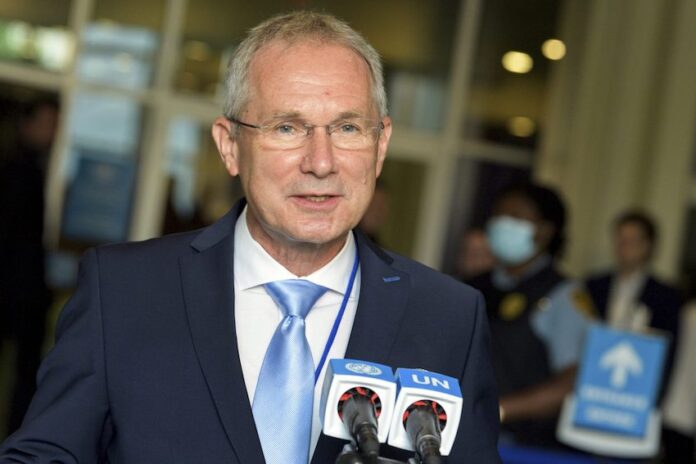 And will work in the spirit of his motto: “Solutions through Solidarity, Sustainability and Science”.

Ambassador Csaba Kőrösi (born in 1958), an experienced Hungarian diplomat was appointed President of the forthcoming session of the UN General Assembly during an official ceremony in New York on 7 June 2022, resulting in a Hungarian official holding the position once again after 40 years. He was elected by acclamation by the UN General Assembly, which consists of 193 UN Member States.

The Director of Environmental Sustainability at the Office of the President of Hungary, will chair the UN General Assembly, the deliberative and policymaking body, for 12 months from September 2022.

Mr. Kőrösi vowed to make ‘Solutions through Solidarity, Sustainability and Science’ the motto for the 77th session.

He highlighted the “ominous challenges” the countries face, including food and energy shortages, but also debt, the climate emergency, biodiversity loss, and urgent humanitarian and protection needs.

Together with the war in Ukraine and other armed conflicts, they create a “perfect storm” and unprecedented instability for the years to come, he warned.

“By electing me, you have reconfirmed the assessment that geopolitical risks and those stemming from the unsustainable way of our development, have started to merge and reinforce each other,” he said.

“Therefore, we should seek integrated solutions to the systemic challenges. There is no way back to the old normal. The only way out of our current predicament is through continued reforms and transformation of this Organization and strengthening our cooperation. We must do much better in delivering on our jointly agreed goals, commitments and pledges.”

Mr. Kőrösi outlined the priorities for tackling complex global challenges while upholding the UN’s key pillars of peace and security, human rights, and sustainable development. These include adhering to the fundamental principles of the UN Charter, making significant and measurable progress in “sustainable transformation”, enhancing the role of science in decision-making and promoting greater solidarity.

“We live in times that rock the foundation this Organization was built upon. With multiple crises looming, nothing less than the credibility of the UN is at stake,” Mr. Kőrösi told his fellow ambassadors.

Reflecting on the founding of the UN, he recalled that 77 years ago, Member States showed that lasting peace can be built on the ashes of war.

“We need the same resolve today to face the challenges that threaten international peace and security as well as our sustainable future on this planet,” he said.

UN Secretary-General António Guterres congratulated the President-elect and highlighted the critical role of the General Assembly in a world in peril.

He said Mr. Kőrösi brings a broad perspective to the post, namely a familiarity with the United Nations, expertise in environmental sustainability and steadfast commitment to multilateral action.

“I welcome his presidency’s focus on ‘Solutions through Solidarity, Sustainability and Science’, and count on him to help us advance across the spectrum of our work,” the UN chief said.

“We look forward to working with him in search of sustainable solutions, in pursuit of our shared goals, and in defence of our common values.”

The current UN General Assembly President, Abdulla Shahid of the Maldives, expressed his readiness to fully support his successor, adding that engagement towards a smooth transition has already begun.

He commended Mr. Kőrösi’s almost 40 years in diplomacy, including serving as Hungary’s Permanent Representative to the UN in New York between 2010-2014, and more recently his tenure as Deputy State Secretary responsible for security policy, multilateral diplomacy and human rights.

“I am certain that, with his extensive experience both here at the UN and around the world, the General Assembly will be in good hands next session,” he said.

Mr. Shahid also spoke about the work still ahead in the General Assembly before he leaves office, including action on the follow-up process for Our Common Agenda, the UN report on the future of global collaboration.