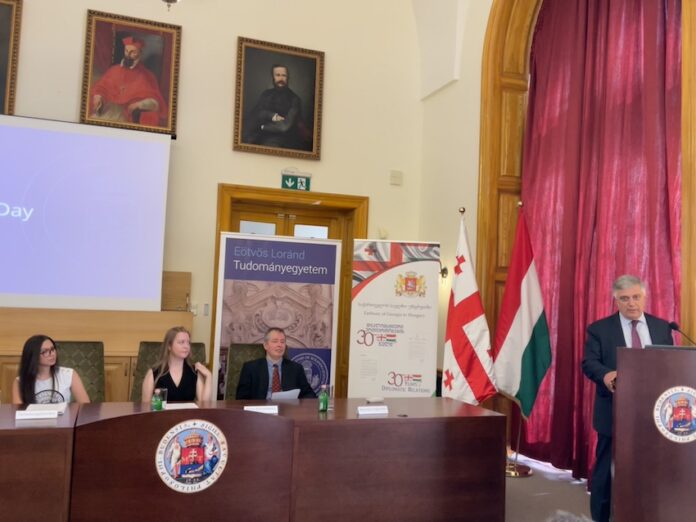 On the occasion of the Independence Day of Georgia and the 30th Anniversary of the Establishment of Diplomatic Relations between Georgia and Hungary, a “Georgian Cultural Day” was hosted by the Embassy of Georgia in Hungary at Eötvös Lóránt (ELTE) University in Budapest.

The event was attended by representatives of the Hungarian political, cultural and academic circles, diplomatic corps and the media, as well as Hungarian and international students.

The celebration was opened by H.E. Zaal Gogsadze, Ambassador of Georgia to Hungary and Prof. Dr. László Borhy, Rector of the University.

In his speech, the Ambassador spoke about Georgia’s accomplishments and challenges that the country has been facing since gaining its independence, the bilateral relations over the course of 30 years between Georgia and Hungary. He also underlined Georgia’s progress towards European integration and stressed the importance of Hungary’s support in this context.

Ambassador Gogsadze expressed his hope that the work done by our country on the path of the EU integration will be appropriately assessed, which will lay the foundation for the process of Georgia’s return to the large European family.

H.E. Anna Maria Sikó, Ambassador of Hungary to Georgia, addressed the audience in a video message and congratulated Georgia on the Independence Day.

The event was also addressed by the ELTE University professors, who delivered interesting reports and lectures on Georgian-Hungarian ties in the field of history, culture and literature:

After the official part, a reception was held offering Georgian wine and dishes to the guests.

Embassy of Georgia to Hungary