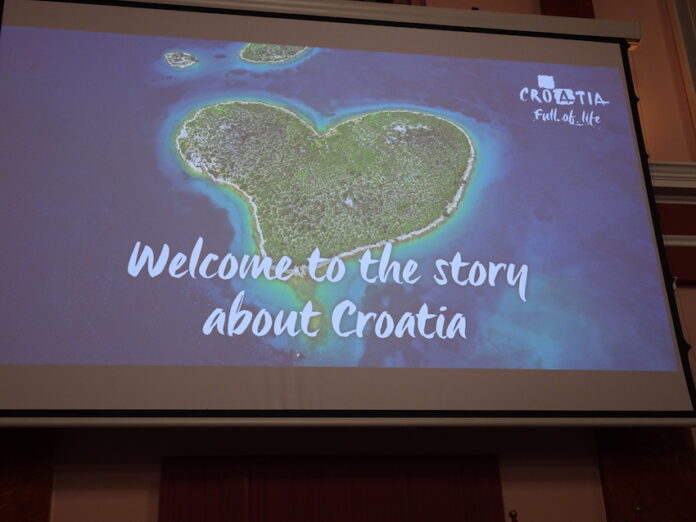 Statehood Day (in Croatian – Dan državnosti) commemorates an important milestone toward Croatia’s independence: the first democratically elected multi-party Parliament was constituted on the 30th May 1990. On this occasion, the Embassy of the Republic of Croatia hosted a diplomatic reception at the Museum of Military History in Buda Castle, attended by hundreds of guests, including Hungarian officials, members of the diplomatic corps and Croatian nationals living in Hungary, who accepted the invitation of H.E. Mladen Andrlić, Ambassador of the Republic of Croatia to Hungary and his spouse, Mrs Sandra Andrlić.

Following the national anthems of Croatia, Hungary and the European Union, Ambassador Andrlić welcomed those present and in his speech pointed out that the Croatian Statehood Day is the most important event for the Croatian Embassy in Hungary and its staff.

Regarding bilateral relations, he noted that in 2022 Croatia and Hungary have been celebrating the 30 years of establishment of diplomatic relations. The two countries, peoples and their national minorities are linked by a special unity, good neighbourly relations and friendship as well as mutual respect, under the large and strong umbrella of the EU and NATO. Cooperation, strong cultural exchange and profound friendship between the two peoples – Croats and Hungarians – obviously remain the fundamental building blocks of their overall relationship.

An excellent description of Croatian-Hungarian relations was given by the famous Croatian writer Mr. Miroslav Krleža, who wrote in the first half of the 20th century: ‘…Disputes between Hungarians and Croats can fill one book, though no library would be sufficient to present our positive communication and mutual understanding.’

“This united approach helped to surmount the major challenge of the Coronavirus pandemic, however, today, when we face new challenges, the destructive Russian aggression against Ukraine, we struggle together for peace and prosperity. Together we shall prevail once again. We shall continue taking care of our national minorities, developing cooperation in the fields of economy, culture, education, science as well as tourism” – concluded his address the Head of Mission.

The attendees were entertained by a trio of classical music while tasting fine Croatian specialities.