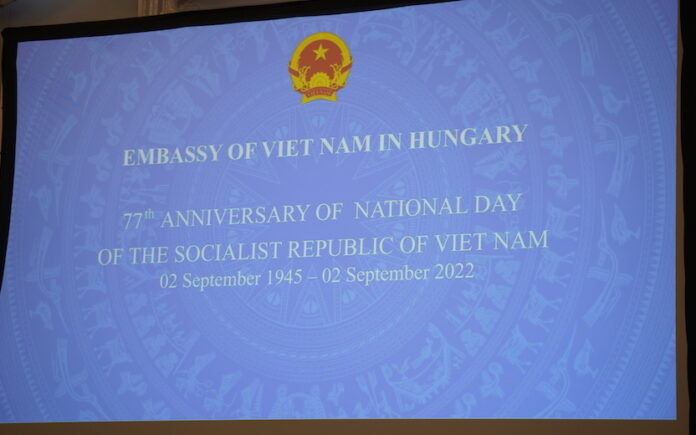 On the 23rd August 2022, the Embassy of the Socialist Republic of Viet Nam hosted a reception to celebrate the 77th National Day at the Stefánia Palace in Budapest.

The event was attended by about 400 invitees, including representatives of the Hungarian National Assembly, the Hungarian government, the Ministry of Foreign Affairs and Trade, local media and other organisations of Hungary, members of the Diplomatic Corps, prominent representatives of the Vietnamese community in Hungary, and valued guests from Viet Nam (generals, swimmers, musicians).

H.E. Mr. Ádám Stifter Deputy State Secretary of the Ministry of Foreign Affairs and Trade of Hungary, was the Guest of Honour.

Following the national anthems of Viet Nam and Hungary, H.E. Nguyen Thi Bich Thao, Ambassador of the Socialist Republic of Viet Nam to Hungary welcomed the guests and recalled the Proclamation of Declaration in 1945 of which the spirit of Independence – Freedom – Happiness lives on in the hearts of the Vietnamese people. This spirit was the burning aspiration and motivation for Viet Nam’s incredible achievements, especially during the COVID-19 pandemic. Briefly touching on Viet Nam’s bilateral ties with Hungary, the Head of Mission said that despite geographical distance and fluctuations in the complicated global and regional context, the traditional friendship and multi-faceted cooperation have been developing sustainably. She expressed confidence that bilateral relations will grow strongly in the future, fulfilling the aspirations and interests of the people of both countries.

Addressing the anniversary as Guest of Honour, Deputy State Secretary of the Ministry of Foreign Affairs and Trade of Hungary, Mr. Ádám Stifter congratulated Viet Nam on the occasion of the National Day. He emphasised that Viet Nam is a very important partner of Hungary and noted that the long-standing bilateral ties have been promoted on the basis of mutual understanding and respect.

After the official part of the event, a traditional Vietnamese dance was performed by Vietnamese students and Gypsy melodies were played by two Hungarian musicians.

The attendees enjoyed the reception while traditional Vietnamese and Hungarian dishes were served, also facilitating better bonds and friendships between Vietnamese and international friends.

Source: Embassy of the Socialist Republic of Viet Nam in Hungary