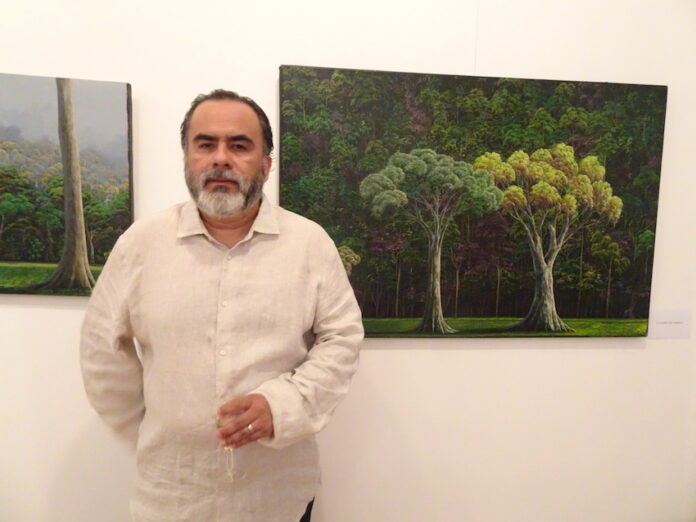 On the invitation of H.E. José Luis Salazar Arrarte, Ambassador of Ecuador to Hungary, Budapest welcomed the arrival of the renowned Ecuadorian painter Servio Zapata to attend the opening of the exhibition of his latest creations called: “Infinite Landscapes of the Middle of the World”, on the last day of August, while saying goodbye to the hot summer of this year.

The artist’s extraordinary canvases, depicting landscapes with beautiful nature and the infinite forests filled the spaces of the Cervantes Institute, which hosted the collection of more than 15 exclusive pieces, as an exhibition hall.

Zapata is internationally recognized for the realism of his landscape works, although he prefers not to define himself as a landscape painter but as a transmitter of peace.

Throughout his history, the realism of his paintings has captivated the art-loving public, thus achieving that in most of his exhibitions most of the pieces on display are reserved for sale before the opening.

It is important to highlight that Zapata’s audacity and charm awaken the interest of his followers because they are landscapes that the artist finds in his imagination.

Important to mention that Ecuador is one of the world’s richest countries in terms of biodiversity, where the nature is part of people’s lives and attitudes, and also inspires art. Ecuador has a huge portion of the Amazon rainforest and the South American cloud forest. In its constitution, Ecuador has recognised the rights of nature, a prove of an eco-responsible approach of the country.

Servio Zapata was born in 1969 in Zaruma, El Oro Province, a centre of Ecuadorian gold. He felt a vocation for art from his childhood, which is confirmed by the various art competitions and prizes he won during his primary and secondary school years. An example of this is the first painting competition sponsored by the Provincial Council of El Oro Province, whose jury included the world-famous Ecuadorian artist Oswaldo Guayasamín.

He has had solo exhibitions in Ecuador in famous galleries of Cuenca, Guayaquil, Quito, Ambato, Zaruma, Machala, and international exhibitions in Spain, Norway, Panama, US/Miami and China. Now Budapest joins the list of cities where Zapata’s art has captivated the audience with its infinite realism. His works are characterized by showing a pure, regal and at the same time vulnerable nature. Servio Zapata’s name has transcended national borders, his works have also been sold by the two most prestigious auction houses: Sotheby’s in New York auctioned his painting entitled “Where the fugitive always returns” and another piece “You should learn that my path is different than yours” was sold at Christie’s.

Multiple book covers have been decorated with his works published in Mexico, Colombia and Peru, part of his curriculum.

Zapata’s large murals adorn countless homes in many cities of Ecuador, while a large number of his paintings are also part of private collections belonging to distinguished families at home and abroad.

Source: Embassy of Ecuador in Budapest