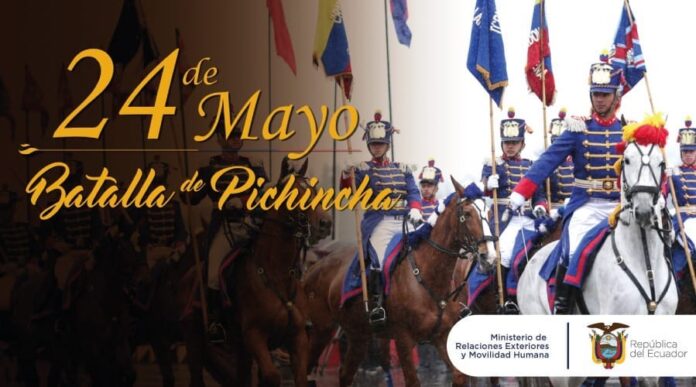 On 24 May 2022, Ecuador celebrates 200 years of the Pichincha Battle, a military feat of great importance by the patriots that freed the Ecuadorian people and paved the way for the creation of the Republic.

To commemorate the momentous date, H.E. Mr. José Luis Salazar Arrarte, Ambassador of the Republic of Ecuador to Hungary and his wife, Mrs. Maria del Carmen Guzman Campuzano hosted a reception at the Cervantes Institute in Budapest, inviting their compatriots living in Hungary to celebrate together and get to know the members of the Ecuadorian colony: men and women and their families, who have lived and worked here for years.

After welcoming the attendees and introducing as the new Ambassador of Ecuador with residence in Budapest, the Head of Mission commemorated the anniversary of the notable event of 200 years ago, which marked a turning point in the history of Ecuador and other South American countries colonised by the Kingdom of Spain.

The Ambassador also drew the guests’ attention to a new comprehensive exhibition titled Bicentenary of Ecuador, 200 Years in Freedom, depicting the history of the Pichincha Battle, its historical context, consequences and achievements, that was designed by the Ministry of Foreign Affairs and Human Mobility of the Republic of Ecuador, exhibited in the Cervantes Institute’s premises, open for visitors.

On this solemn occasion, the Ambassador reminded the audience to their homeland, Ecuador, which he represents in Hungary with full devotion and commitment for its progress and prosperity, by quoting a line from John F. Kennedy’s Inaugural Address, delivered on 20 January 1961, that became a strong motto all over the world: “Ask not what your country can do for you – ask what you can do for your country”.

The official part of the celebration was followed by a reception and friendly conversations while toasting in honour of the day with good Ecuadorian wine.

Brief History of the Pichincha Battle:

The Battle of Pichincha liberated the Ecuadorian people and paved the way for the establishment of the Republic. It is called “Battle of the Nations” because 200 years ago men from many European and American countries faced each other in the struggle for the Latin Americans. Few times in history has there been a victorious army consisting of officers and soldiers from so many countries. The Liberation Army composed of men from Argentina, Uruguay, Paraguay, Chile, Peru, Bolivia, Colombia, Venezuela, Panama, as well as from England, Scotland, Wales, Ireland, Italy, France, Germany, Holland. And of course, from all provinces of Ecuador and from Spain.

The Independence of Latin America was the historical process of the rebellion of its peoples, influenced by the Independence of the United States of America, achieved in 1776, the French Revolution (1789-1799), to end colonial dominion and build independent nation-states. The immediate antecedent was Napoleon’s invasion to Spain and the absence of a king due to the abdication of Ferdinand VII, imposed by Napoleon Bonaparte on 5 May 1808.

On the 24th May 1822 the decisive battle took place on the slopes of Mount Pichincha (a stratovolcano), at 4,600 meters above sea level. About 60,000 people witnessed it from the colonial city of Quito, and its downtown was less than 5 miles below the combat zone. The libertarian forces were commanded by General Antonio Jose de Sucre, a Venezuelan who fought in various countries and later served as President of Peru and Bolivia.

The fierce battle lasted about three hours and claimed victory for the liberating army. The Royalist troops were decimated and fled down the mountain in disorder. 400 bodies of the royalists and 200 insurgents lay on the battlefield. 190 Royalists and 140 Republicans were wounded. Sucre took 1,100 soldiers and 160 officers as prisoners, in addition to all weapons.

On 25 May, the Spanish General Melchor Aymerich capitulated. Then Sucre and the Patriots entered Quito and declared its independence.

This military victory also allowed the Venezuelan liberator Simon Bolivar to consolidate in the Andean nations a political, anti-colonial project “The Great Colombia”, based on unity against foreign empires, since the Battle of Pichincha immediately became a symbol of strength and unity of the patriots who forced the royalist army to surrender. The great Battle of Pichincha not only marks Ecuador’s Independence Day, but also opened the doors to the dream of Bolívar and his warriors. Two and a half years later, during the Peruvian War of Independence, the Battle of Ayacucho on 9 December 1824 was another decisive military encounter. This triumphant battle ensured the independence of Peru and the rest of South American countries, thus ending Spanish rule in South America.