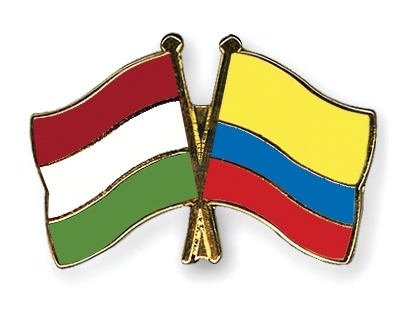 H.E. Mrs. Carmenza Jaramillo, Ambassador of the Republic of Colombia to Hungary hosted a solemn reception in honour of Mr. Lóránd Endreffy, Director of the Department for Latin America and the Caribbean at the Ministry of Foreign Affairs and Trade, former Ambassador of Hungary to Colombia, and to hand over the Grand Cross of the Order of San Carlos granted by the President of the Republic of Colombia Dr. Iván Duque Márquez.

The event was attended by Mr. Dávid Bencsik, Deputy State Secretary of the Ministry of Agriculture, Ms. Katalin Nagy, Honorary Consul of Colombia in Szeged, members of the diplomatic corps and officials of the Ministry of Foreign Affairs and Trade, and the Endreffy Family.

In her speech, the head of mission said:

“The occasion that brings us together today is to express our recognition and gratitude to Ambassador Lóránd Endreffy by presenting the Grand Cross of the Order of San Carlos for his work at the Embassy of Hungary in Bogotá.

The Order of San Carlos, founded in 1954, is one of the three national orders of the Republic of Colombia to honour those who have rendered exceptional services to the nation, particularly in the field of international relations. The Grand Cross is the highest degree an Ambassador can receive for excellent achievements, outstanding performance of duties and great support for the benefit of international relations. This emerald green cross is a symbol of the Colombian Ministry of Foreign Affairs and has a special meaning for all Colombian diplomats. We appreciate the immense honour to receive this Order and we know the efforts made to earn this distinction.”

After presenting the award, the invitees listened to the video message of Dr. Marta Lucía Ramírez, Vice President and Minister of Foreign Affairs of Colombia, praising Ambassador Lóránd Endreffy’s merits.