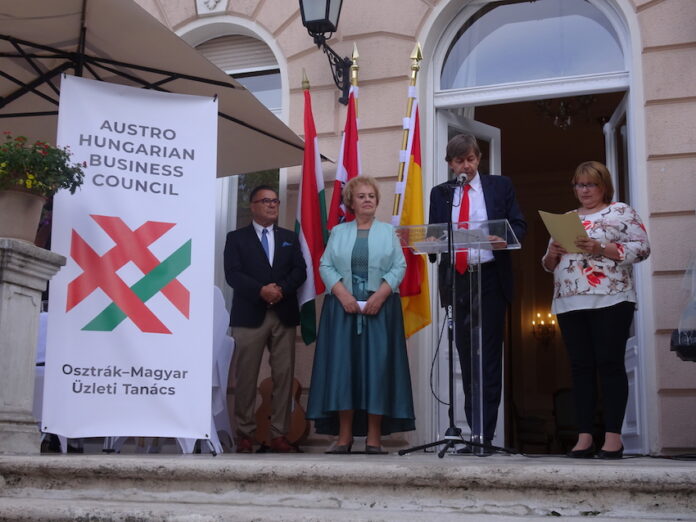 After a two-year hiatus, due to the COVID-19 pandemic, the Embassy of Austria in Budapest hosted again a summer celebration called Sommerfest, which has evolved into a tradition. It was held in the spirit of cooperation and friendship between the easternmost state of Austria, Burgenland and Hungary, on the 15th July 2022. The special relationship between the two can be attributed not only to their geographic location in Central Europe (they share a 366-km border), but also to their common history.

On the invitation of H.E. Dr. Alexander Grubmayr, Ambassador of the Republic of Austria to Hungary and his wife, hundreds of prominent guests attended the event in the beautiful garden of the Residence, among them representatives of the Hungarian political and cultural life, academic and business circles, members of the diplomatic corps and the Austrian community. The Head of Mission greeted the attendees, Mr Othmar Michl, President of the Austro-Hungarian Business Council and the Guest of Honour, Mrs Verena Dunst, President of the Burgenland State Parliament.

In her speech, President Dunst stressed that the Austrian Embassy in Budapest has always been an important pioneer for Burgenland in terms of connections to the neighbouring country. This year, it was again the Austrian ambassador and his wife who, together with the State of Burgenland and the Austro-Hungarian Council hosted a pleasant evening to meet and exchange ideas with representatives of the political, business and cultural life.

She also emphasised the value of cross-border cooperation. “It is very important today to have bilateral talks, to network and to always focus on good cooperation between Burgenland and Hungary. I would like to highlight some areas that play a key role in cross-border cooperation and benefit the citizens of both countries: economy, transport policy, disaster prevention, all of which are almost impossible for one country to manage. Recently, the ambulance and emergency services of the two countries signed a cooperation agreement. We want to thank the 15,000 Hungarian citizens working in Burgenland, (which makes every sixth employee a Hungarian) without them our economy could not function, mainly employed in the tourism sector” – she added.

“Burgenland is a multi-ethnic region in Austria, where Hungarians, Croatians and Roma live, but unfortunately I didn’t succeed to learn Hungarian, even though I should have, just as my grandmother studied in a Hungarian school in the city of Körmend” – President Verena Dunst concluded her speech and thanked the warm welcome and hospitality.

The invitees enjoyed – while tasting the excellent dishes, famous specialities and good wines from Burgenland – the musical performance of the One Time Band and the songs with guitar play by Rubin, from Burgenland.

Official visit of the Governor of Burgenland to Budapest

On the invitation of Péter Szijjártó, Minister of Foreign Affairs and Trade of Hungary, Hans Peter Doskozil, the Governor of Burgenland paid an official visit to Hungary on the 22 July 2022.

During their meeting a Letter of Intent was signed by the sides on further developing cross-border cooperation between Hungary and Burgenland.

“Hungary wants close cooperation with Austria, including Burgenland, because several challenges can only be resolved through joint efforts. The value of good and well-balanced cooperation is even higher in such out-off-the-ordinary periods as the current one.” – the Minister said at their joint press conference held in the Foreign Ministry in Budapest.