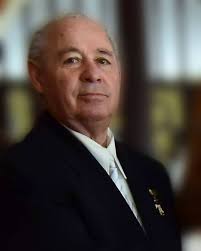 Brigadier General, famous bodyguard, 10-dan Karate and Jiu Jitsu Master, founder of the Hungarian Karate and Martial Arts Federation, Sir Dr. József Polyák died at the age of 83. We lost a true legend, who left a large void in many lives.

He was born in 1938 in Felsőszentiván (Bács-Kiskun County, in Hungary). At the age of 14 he went to Budapest and studied architectural sculpting. At a young age, he came into contact with judo and fencing. After the Revolution of 1956, he set out for the world in January ’57, reaching Australia, following some months he spent in Yugoslavia and Italy. He studied and taught with the sculptor Andor Mészáros. During his years in Australia, he became acquainted with the art of karate, and he continued his master’s studies in Japan. His martial arts experience paved the way for bodyguard work. By this time, he was fluent in Serbian, Russian, Italian, English and Japanese, in addition to Hungarian, his mother tongue.

After touring the world, he returned to Hungary in 1967. In addition to setting sculpture, he worked as a stuntman in the film industry. Not long after, he founded the first organized Hungarian stunt group, when he met his later wife, Mária Polyák-Salacz, with whom they raised 3 children. It was a Stand-in for all Hungarian action film heroes during the socialist period. He made his debut in Gyula the Knight in Winter and Summer production, he had to fall off the horse a few times instead of the famous actor, Gábor Koncz. A contemporary film newspaper wrote, “If it weren’t for József Polyák, we wouldn’t be able to shoot historical films.”

He played a key role in founding the first Hungarian Karate Association and then in its management.

In 1994, József Polyák, along with György Popper and István Kelemen, was a founding member of the International Bodyguard and Security Services Association (IBSSA).

Grand Cross Knight of the International Order of Knights of Security

In addition, he received numerous national and international recognitions for his outstanding work in the field of security and martial arts.