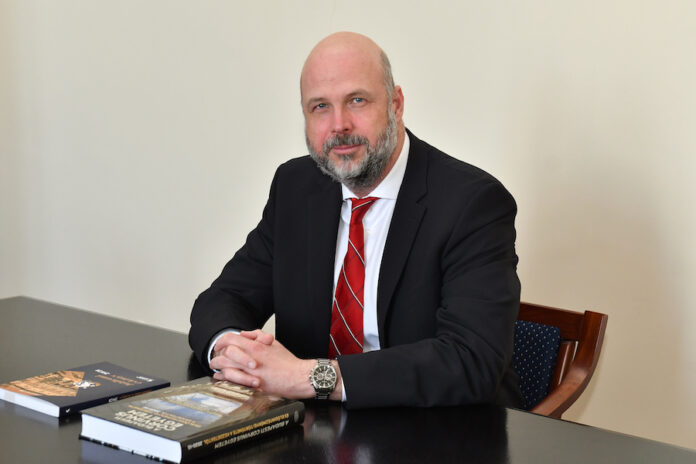 Professor Takáts, what motivated You to apply for the position of Rector of Corvinus University of Budapest?

– It has always been my secret plan to return to Hungary to give back from the knowledge I gained during my 20-plus-year international career. However, I expected the return to take place later. I thought when my international career was over, when I got tired of negotiating with finance ministers or discussing with central bank governors in the Basel ‘tower’, I could launch a second career in academia. Yet, life has brought this move forward. I had professional discussions with Corvinus professors about international experience well before the foundation took form. These discussions yielded smaller reform plans – and also prompted interest from the members of the University Senate and the Board of Trustees for the rector’s application.

I could sense a unique opportunity. I felt that if we fail to take it, the university could get stuck in a half-successful reform. There was a very effective university reform in the second half of the 1980s, the benefits of which I also enjoyed as a Corvinus student – so I personally owe a lot to that reform. In the following 30 years, though, reform plans failed. Even the Bologna Process did not yield the expected improvement. Therefore, the need to reform has become dire now. In addition, besides the need a unique opportunity also arose. The foundation model allows for decisive shift towards quality – something that was not possible before when funding depended on the number of students. So, the combination of need and opportunity for change came together now. And I felt that I could not refuse this task.

Please talk about Your career so far. What influenced You most?

– Through my international career and life, I have gained a truly international mindset. My research was obviously related to international economic research, from obtaining my PhD at Princeton University to working at the London School of Economics and Political Science. In my public policy work I have also dealt with economic issues relevant for the international community. At the International Monetary Fund, I examined a full range of economic policy issues, while at the Bank for International Settlements I delved into monetary policy and banking regulation. Obviously, my personal life also became international: three of my children were born in the US, two in Switzerland, and my schoolmates and friends are from all over the world. To phrase it somewhat lightly, given the time I spent flying over the Atlantic, Atlanticism became inevitably a cornerstone of my thinking. It has become my conviction that, while respecting common values and interests, we can find a compromise that is beneficial, or at least acceptable to all parties. And we need international cooperation to tackle a range of challenges, from security policy to climate change.

What was Your initial programme that could be implemented realistically and what were Your first strategic goals?

– The advantage of the university rector’s application is that the candidate’s programme is available to the citizens of the university, especially the members of the decision-making Senate. So, my programme appeared on the Corvinus website, marking three priority areas: 1. experience based studies, 2. a shift for research culture, and 3. internationalisation. In their implementation, I am trying to find the right balance: neither hurrying nor stalling will solve problems. In finding the right balance, I count on the input from the university’s scientific community.

To what extent can You enforce Your own values in decision-making?

– I definitely enforce my key values. I consistently facilitate academic and research freedom: the university staff enjoys complete freedom in their research and publication. When assessing a research, scientific quality is relevant not the direction of public policy proposals. Equally important to me is the respect among university citizens towards each other, an honest communication that respects the sensitivity of others. And I certainly enforce the performance principle: proper recognition of performance is a fundamental value, whether in education, research, or in academic service. Yet, Corvinus University is no one-man business. We have a diverse set of values stemming from our history, our debates and our academic development. I aim to build an inclusive culture and embrace these values too.

What is Your approach as the leader of the university?

– My guiding principle is quality. I am for better education and better research. We prefer to stay a smaller but excellent rather than a larger but mediocre university. I am glad to say that we are on the right track towards quality both in education and in research. We have renewed our majors, and students’ feedback shows that they learn more. At some renewed majors, students learn 4-5 times more than they did before the renewal. Students appreciate this – and we are able to enrol increasingly excellent students. Last summer a record-high score was required to get into Corvinus. We broke every record – compared to other Hungarian universities and also to our own past history.

We often hear that Corvinus University is an elite university. What do You think that means?

– Corvinus does not educate the children of the current elite, but the elite of the future. Those who come here will find their way to elite positions through the training received here, the friendships acquired here, the motivation gained here, the gates opened here. On average, Corvinus graduates undoubtedly earn far more than graduates from other universities. But money is not the only standard of success: besides corporate leaders we train university professors and public administration leaders who also belong to our definition of the elite.

Is there something You greatly miss from Your earlier life?

– Rhine swimming. For the past 12 years I lived in Basel: in addition to meetings with central bank governors and regulating banks, swimming in the Rhine has become one of my favourite pastimes. In the summer thousands have fun on the riverbank sunbathing, grilling or just dipping in the river in the middle of the city. Winter, though quieter, is not entirely silent.  Smaller but more enthusiastic teams swim in the increasingly refreshing water. That world captivated me, I have become an avid Rhine swimmer, all year round. In fact, I miss swimming in December even more than in August. Sometimes when I look out of my office overlooking the Danube, I catch myself thinking about swimming in the Danube in Budapest…

Where do You find inspiration for recharging Your ‘internal batteries’?

– Leading a transforming university involves a lot of stress which is much easier to endure with sports. Not elite sports, of course, merely the joy of moving. I am an omnivore: I enjoy playing tennis or sailing with my friends in the summer, I go skiing or ice skating with my family in the winter. In my everyday life I try to ride a bike or go on foot whenever I can. And sports allow for a bit of diversion as well. My friends teased me that the mountaineering analogy of my rector’s application would only be truly credible if I climbed a peak. They managed to persuade me! Last May, even before my appointment we climbed the 4,164-metre-high Breithorn in the Swiss Alps. It was an exceptional experience for me: not only to reach the top in the sparkling sunshine, but also to overcome my acrophobia.

What would be Your wish for the future?

– As a rector of Corvinus University of Budapest I would like to pave the way for talent. Talented young people are the key to the future, the real engines of our economy and society. But this talent needs to be nurtured to find its way. This is the task that motivates me.