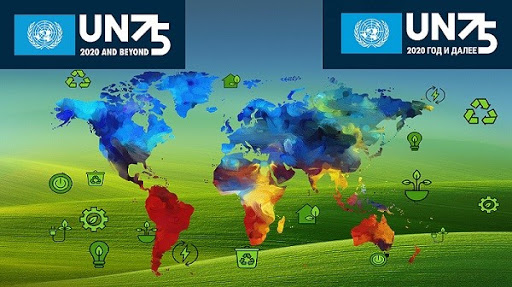 “Multilateralism is not an option, but a necessity”

75 years ago, when guns fell silent after six years of war ravaging the world, nations worldwide decided to change the course of history and took the commitment to working together for peace. The founding Charter of the United Nations entered into force on the 24th October 1945, thus the UN was officially established. Since then, we have been celebrating UN Day on 24th October. The ideals of the Organization – peace, justice, equality and dignity – are beacons to a better world. It took two world wars, millions of deaths and the horrors of the Holocaust for leaders to commit themselves to international cooperation and the rule of law. That commitment produced results.

There is no other global organization with the legitimacy, convening power and normative impact of the United Nations.

For 75 years, the UN has served as a global forum for nations to discuss the world’s most difficult problems. The UN aims to maintain international peace and security, protect human rights, deliver humanitarian aid, promote sustainable development and uphold international law. It is a place for dialogue and how we can build a better future for all.

Over the three quarters of a century, the UN has been able to address and resolve many challenges and crises: the Cold War, hundreds of conflicts and four pandemics around the world, and reached historic accomplishments: peace treaties and peacekeeping, decolonization, human rights standards, the triumph over apartheid and life-saving humanitarian aid to millions of victims of conflicts and disasters. The eradication of disease, reduction of hunger, development of international law and landmark pacts to protect the environment are further successes. Most recently, unanimous support for the Sustainable Development Goals and the Paris Agreement on Climate Change has provided an inspiring vision for the 21st century.

The UN has grown from 51 to 193 member states, developed 38 funds, programs and specialized agencies, and launched 71 peacekeeping operations on all continents. These successes have been rewarded with 12 Nobel Peace Prizes, the latest of which was awarded to the World Food Program in 2020. These are great achievements that all Member States can be proud of.

This anniversary comes at a time of great turmoil in the world, compounded by an unprecedented global health crisis due to the COVID-19 pandemic, with severe economic and social impacts. But it is also a reminder that times of struggle can be opportunities for positive change and transformation. The COVID-19 crisis could mark a renewal of multilateralism. In fact, it is impossible for all the countries of the world to act unilaterally and in isolation in order to face global challenges such as the pandemic, the economic crisis and the ecological crisis, which do not respect borders. Only through multilateral dialogue and international cooperation can concrete solutions be found to address these global crises.

That is why the UN General Secretariat has launched the UN75 initiative with the motto: Shaping our future together, so to establish a global dialogue that will examine the main priorities of our time and look for ways to build a better future for all.

The 75th session of the UN General Assembly (UNGA) was opened on 15th September 2020 in New York, in virtual format, with very limited presence in the building due to the COVID-19 pandemic.

On the 21st September, the heads of state and government from 193 Member States exchanged statements on pre-recorded messages, in the General Assembly Hall (GA), on the theme “The future we want, the United Nations we need: reaffirming our collective commitment to multilateralism – confronting COVID-19 through effective multilateral action”.

The world leaders of the General Assembly adopted a declaration in virtual format honouring the multilateral framework put in place by its founders in 1945, entitled “Declaration on the Commemoration of the 75th anniversary of the United Nations”. The text lays out 12 succinct commitments to reanimate global resolve: leave no one behind, protect the planet, promote peace, abide by international law, place women at the centre, build trust, improve digital cooperation, upgrade the UN, ensure sustainable financing, boost partnerships, work with youth, and finally, be prepared.

“Our world is not yet the world our founders envisaged 75 years ago”- world leaders said in the declaration. “Our challenges are interconnected and can only be addressed through reinvigorated multilateralism,” they emphasized. Acknowledging that COVID-19 caught them off-guard, they agreed that it served as a wake-up call to improve preparedness. “What we agree today, will affect the sustainability of our planet as well as the welfare of generations for decades,” they said, committing to uphold the declaration in the spirit of “We, the Peoples”.

It was followed by a call from UN Secretary-General António Guterres to preserve the longest period in modern history without military confrontation among the world’s major powers. Yet, there is still so much to do. Gender inequality is the “greatest single challenge to human rights around the world”. The climate calamity looms. Poverty is rising. Hatred is spreading. And nuclear weapons remain on hair-trigger alert. We can only address them together. An interconnected world requires a networked multilateralism, in which the UN, international financial institutions, regional organizations, trading blocs and others work more closely and effectively together. Multilateralism is not an option, but a necessity. The UN is only as strong as its members and the commitment to its ideals.

In 2020, the UN Day concert was sponsored by the UN Permanent Mission of Italy on “Reimagine, Rebalance, Restart: recovering together for our shared humanity”, a dance performance featuring the Teatro alla Scala Orchestra with star dancer Roberto Bolle, UNICEF Goodwill Ambassador since 1999, along with other world-class dancers, and was pre-recorded due to the pandemic and screened in the GA Hall.