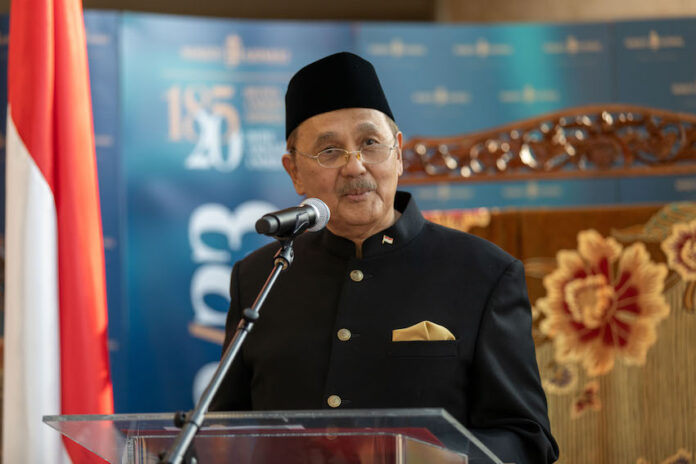 To mark the 77th Anniversary of the Independence of the Republic of Indonesia (HUT RI), H.E. Mr. A. H. Dimas Wahab, Ambassador of the Republic of Indonesia to Hungary, and Mrs. Dewi Hartati Wahab – as part of their dynamic cultural diplomacy in foreign relations – hosted a diplomatic reception with an extraordinary cultural show at the Hungarian National Theatre in the presence of distinguished guests, including Ambassadors and members of the Diplomatic Corps, government officials and Mr. Ádám Stifter, Deputy State Secretary for Development of Eastern Relations, from the Ministry of Foreign Affairs and Trade of Hungary, as well as Indonesian nationals.

In his speech, Ambassador Wahab said:

“I am pleased to welcome you all, to the celebration of the 77th anniversary of Indonesian Independence. Since the day of its independence on 17 August 1945, until now, Indonesia has been experiencing rapid development and progress in various fields, including social, political and economic. Indonesia is now the third largest democracy in the world and the fifth largest economy in Asia. As an appointed member of the Global Crisis Response Group, it is advocating the solution to food, energy and financial crises globally. This year Indonesia holds the G20 Presidency and in 2023 we will assume the chairmanship of ASEAN.

Indonesia is also one of the countries that has successfully controlled the COVID-19 pandemic, in terms of the number of vaccination 432.000.000 doses administered so far.

In 2022, Indonesia and Hungary celebrate 67 years of strong and close diplomatic relations and we are proud of the progress we have made. Progress in promoting people-to-people contact is obvious. Darmasiswa scholarships continue to be granted for Hungarian students to learn Indonesian arts and culture. The number of Stipendium Hungaricum scholarships, granted by the Hungarian government to Indonesian students, is doubled to 100.

This year, Indonesia projects to send 500 vocational students and graduates to Hungary under the vocational internship program. The two countries also agree to set up a joint investment fund to finance national strategic projects in Indonesia. Significant investments and projects were signed, among others the construction of a multi-lane free flow (MLFF) electronic payment system on toll roads by a Hungarian company. Exchange of visits between high-ranking officials and businessmen took place and positive trade trends are recorded.

following the reception, it is my pleasure to invite all of you to take your seats in the theatre auditorium and enjoy the colourful performance entitled “Wonderful Indonesia” by Indonesian dancers, singers and musician in cooperation with the Hungarian Orchestra, as a drive to promote Indonesian arts and culture on this prestigious stage of the Hungarian National Theatre, for the local and international audience. This musical collaboration shows the harmony of the relationship between Indonesia and Hungary.

This event is made possible thanks to the generous support of Paguyuban Citra, led by Mr. Agum Gumelar and Mrs. Linda Amalia Sari Gumelar.

We would like to thank our sponsors who make this event happen, Markija, Roatex Indonesia, Waskita Karya, and Hutama Karya, and the Indonesian Trade Promotion Centre in Budapest.

May I conclude with my good wishes for friendly relations and cooperation between Indonesia and Hungary; the prosperity of Hungary and Indonesia, and finally, the good health of everyone present tonight. Thank You.”

Video of the event can be seen here: https://youtu.be/7Socffat70w

Source: Embassy of Indonesia in Budapest