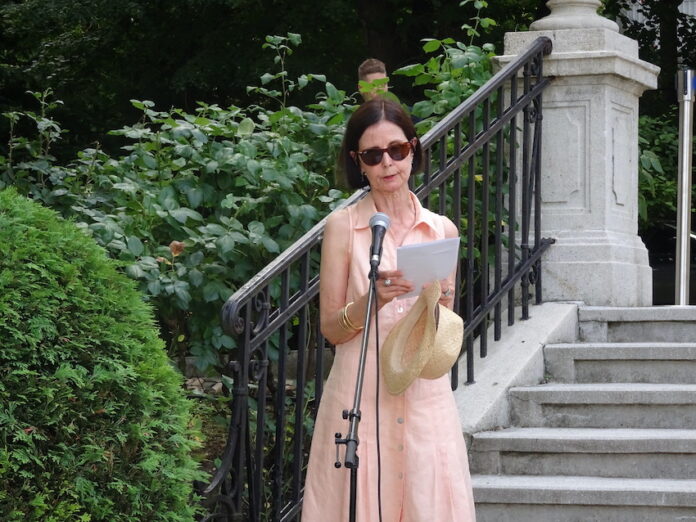 Edited and Photographed by Anna Popper

The traditional reception on the occasion of 14 July, the National Day of France, was held at the Ambassador’s residence. After a two-year interruption due to COVID, it was finally possible to meet up and celebrate together with Hungarian and French friends.

The event was attended by Ambassadors and diplomats, senior representatives of the political, social, academic and cultural life, as well as Hungarian and French business circles. Among the illustrious guests were present: Mr Tibor Navracsics, Minister responsible for territorial development and the use of European funds, former Foreign Minister Mr János Martonyi, General Péter Lippai, Chief of Staff of the National Defence, Mrs Zsófia Koncz, State Secretary of the Ministry of Technology and Industry, Mr Gábor Gion, State Secretary responsible for strategic planning at the Ministry of Defence and Mr Péter Márki-Zay, Mayor of the City of Hódmezővásárhely, Mrs Katalin Csöbör, MP of Miskolc.

In her speech, also in excellent Hungarian, H.E. Mrs Pascale Andréani, Ambassador of the Republic of France to Hungary highlighted the long-standing and multifaceted ties between France and Hungary, as well as their importance in ensuring unity within the European Union.

At the end of her successful tenure with great achievements, the Head of Mission took this solemn opportunity to bid farewell to Hungary, the Hungarian counterparts, colleagues and friends.

“On this national holiday, I would first like to talk about Europe as wehave just completed the six months of the French presidency and handed over the baton to the Czech Presidency.

Our presidency has been marked by Russia’s aggression against Ukraine. In this crisis, the European Union has remained united and in solidarity with Ukraine, and I have no doubt that this will continue.

Here, in Hungary we are at the centre of Europe. This is why I was so happy to be appointed here, after having devoted most of my diplomatic career to Europe, to European issues. I had discovered Hungary by following its negotiations for accession to the European Union, but I did not measure the incredible richness and seniority of the relations between our two countries, and I am still amazed by it every day after four year.

To mention just a few examples, if many know the Hussars of Bercsényi and know that it was Ferenc Rákóczi II, who introduced Tokaj wine to the court of Louis XIV, who knows about the lifelong friendship between Berlioz and Liszt? Who knows that one of the first places filmed by the Lumière brothers was the Chain Bridge in Budapest? Who knows the story of the French prisoners who escaped from Germany and took refuge in Hungary during WWII and were so generously welcomed in Hungary?

However, despite all these links, we don’t know each other well. This is why I had the idea of publishing the book titled “Word from the Ambassador” (Le mot de l’Ambassadrice) in Hungary, which tells several episodes of our common history.

Today we are partners within the European Union and that is why President Macron’s visit to Hungary, on the Eve of the French Presidency, was so important, like those of the Ministers of Foreign Affairs, European Affairs, of the Interior as well as many members of the parliaments, including the Presidents of the two Foreign Affairs Committees of the two National Assemblies.

As with all our other partners, sometimes we have differences, disputes. But we must overcome these differences, because it is together that we will be able to weigh in the world. Alone we do not exist against China, Russia and the rest of the world.

‘United in diversity’ is the motto of the European Union; because what makes Europe strong is that, what unites us is more important than what separates us.

We know this in particular since the summer of 1989, when Hungary opened its borders and thus allowed the fall of the Berlin Wall. And we will be eternally grateful to you, dear Hungarian friends.

Hungary is a profoundly European country. I can check it every day since I have been in Budapest. It must reconnect with the vanguard role of freedom in Europe that it played so valiantly in 1848, 1956, 1989. Thank you.

And then, words of gratitude to the whole team of the Embassy, consulate, economic service, cultural service and Institut Français,who supported and helped me during these four years when I had the chance to be here.”

The guests enjoyed the great atmosphere and friendly conversations on this warm summer afternoon, while tasting the specialities of the famous French gastronomy, including excellent champagnes, wines and desserts.

Your Excellency, Ambassador Pascale Andréani, we are wishing you further successes in your diplomatic career. And congratulations for reaching such a high level in learning the Hungarian language!