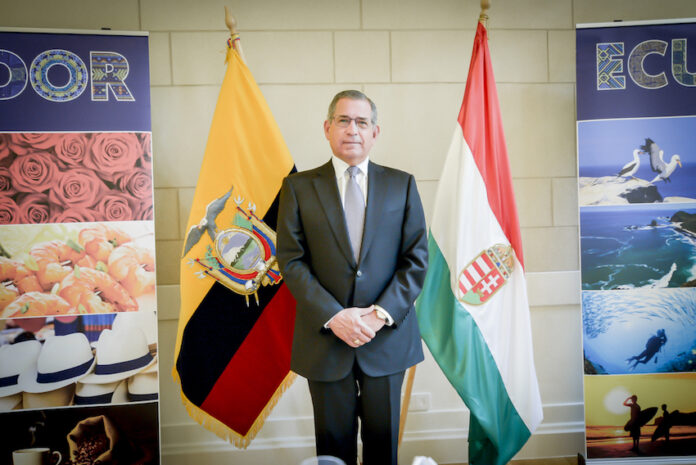 New bilateral business is on the horizon with Ecuador, which is famous for its special tropical crops of internationally recognised high quality, exporting all over the world.

Shrimp, tuna, bananas, cocoa, and coffee were the main protagonists of the dinner hosted by the Embassy of Ecuador in Budapest on the evening of 14 July 2022.

The gorgeous Sisi Room of the Aurea Ana Palace Hotel, situated in the Parliament area, was a perfect setting for Ecuador’s Premium export products to capture the attention of an exclusive group of Hungarian businessmen and influential personalities, in the framework of the business dinner “Exotic Flavours from the Middle of the World”.

The event was sponsored by H.E. José Luis Salazar Arrarte, Ambassador of Ecuador to Hungary, and counted on the expertise of the renowned chef Miguel Xavier Monar and his colleagues, Luis Uyama and the famous barista Jairo Sanguña, who were in charge of delighting palates in an 8-course tasting menu. The world-famous icon of gastronomy with his two professional and business partners arrived to Budapest from Madrid, where they run the traditional Ecuadorian restaurant, La Fontana Gastro.

The main Ecuadorian ingredients – shrimp, bananas, tuna, and cocoa – were shipped from Ecuador especially for this occasion and used in the dinner that showcased star dishes of the gastronomy of half the world, such as shrimp ceviche based on tropical fruit juice cocktails, or the famous patacones with tuna ceviche.

It is important to remember that in the last two years, Ecuador was the first white shrimp exporting country in the world, recognized as the best quality, and also the second largest tuna producing nation in the world, in addition to having the most potent tuna fleet in the Eastern Pacific.

The event included a coffee tasting of Arabica and Amazonian Robusta coffees, using techniques such as V60 and Aeropress to exploit the flavour of Ecuadorian beans, which are gradually gaining ground internationally for their characteristic flavour.

The wines from Ecuador,where the two world hemispheres meet, were provided by “Dos Hemisferios”, a popular winery in San Miguel del Morro, Playas, on the coast side of Ecuador, which is starting to make its way in the European market.

Hundreds of the world’s most beautiful red roses, another flagship product of Ecuador, decorated the Sisi Room of the 19th century historic palace, repurposed as a hotel, honouring the memory of the Queen Consort of Emperor Franz Joseph, that greatly impressed the invitees, while listening to the duo playing classical music, as an ultimate choice for this special occasion.

The function was attended by executives from the leading import and marketing chains of the Hungarian food and beverage sector, as well as from the hotel and catering sector.

By this event Ambassador José Luis Salazar Arrarte contributes to the development of economic – business ties between Ecuador and Hungary, continuing to fulfil the objective decreed by President Guillermo Lasso to bring “More Ecuador to the World and more World for Ecuador”.