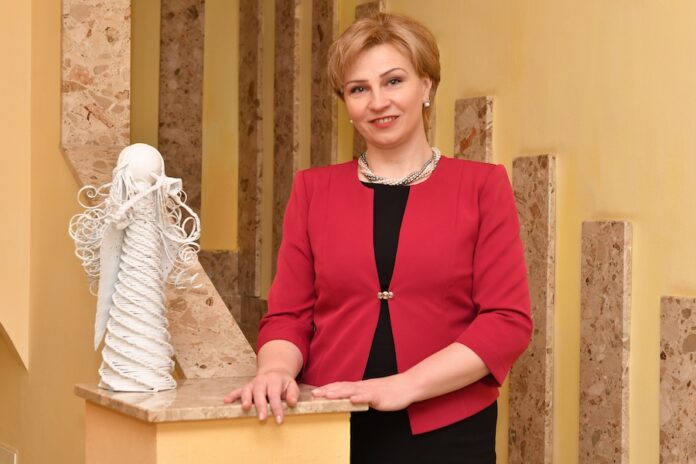 Interview with H.E. Ms Liubov Nepop, Ambassador of Ukraine to Hungary, President of the Danube Commission

Your Excellency, congratulations on the election of Ukraine to the Presidency of the Danube Commission, which is of historic importance.

– For the first time in the more than 70-year history of the Danube Commission (DС), a representative of Ukraine assumes the post of DС President from 1st January 2021. It is a great honour and responsibility for me that I have been this representative. Regarding the Ukrainian DС Presidency in the next three years, it is also noteworthy that I took over the baton of the DС President from H.E. Gordan Grlić-Radman, Croatian Minister for Foreign and European Affairs, who was also the Ambassador of Croatia to Hungary, later to Germany and the Representative of Croatia in DС when he was elected, paying special attention to the commission’s activities throughout his presidency. The Danube Commission is the oldest European organisation (even the Council of Europe was only established a year later), founded by the Convention Regarding the Regime of Navigation on the Danube, signed in Belgrade on the 18th August 1948, and still plays an important role in international cooperation.

What is the focus of the Danube Commission’s work on the most European river that runs across ten countries?

– The DC is headquartered in Budapest, aiming to ensure and develop free navigation on the Danube for merchant ships flying under the flag of the member states of the Belgrade Convention, to strengthen trade, cultural relations and human rights between them and others involved in inter-basin shipping. Considering the work of the DC, this institution is responsible for refining the basic rules of navigation on the Danube. It coordinates technical requirements for ships, monitors and improves requirements for the development of elements of shipping infrastructure (shipbuilding, port facilities, communication systems); harmonises river supervision rules, fosters recommendations for the training of crew members and service personnel, environmental regulations, and coordinates the activities of hydrometeorological and other competent authorities of the DC member states. So, the range of activities is wide and determines how successful and competitive shipping will be on the 2857 km long river, how well it meets the needs of the organisation’s member states today. The DC activities consider the experience in inland navigation in almost the whole of continental Europe. For the next three years, as DC President, my task is to take into maximum account the interests of all the countries along the Danube and to contribute to a consensus on these issues.

What goals and tasks have You set for the future?

– In the future, the Commission must make it a priority to ensure that all the conditions necessary for the navigability of the Danube are met, as this is a key part of the overall European transport system. The extent to which this will be up-to-date, efficient and demanded depends highly on the DC’s work. An important task of the DC remains the creation and modernisation of the advanced river logistics infrastructure (modernisation of shipbuilding, development of ports and communication systems) that meets the requirements of international transport corridors and increases the competitiveness of shipping on the Danube, especially in freight transport. We also have to study environmental issues: I am thinking here mainly of fleet modernisation projects, emission reduction, energy efficiency of fleet operations, construction of new, automated, high-energy ships, use of new types of structural materials and equipment in line with the Green Danube Fleet concept.

Many experts find the studying of the possibilities for creating the conditions for the transport of “green” hydrogen along the Danube promising, for which an adequate transport fleet and land port infrastructure are prerequisites. The EU recently unveiled a long-awaited European hydrogen strategy which – according to Frans Timmermans, Vice-President of the European Commission –, “should launch a new technological revolution in Europe.” Therefore, of course, the DC will also strive to gather the latest experience. As an important partner, Ukraine wants to join the implementation of the European hydrogen strategy and the supply of new energy sources to the European market. Ukrainian Minister of Foreign Affairs, Mr. Dmytro Kuleba stated that the EU has named Ukraine as its key partner in implementing this strategy. In addition, it will be a task of the DC in the near future to promote the potential of Danube shipping to effectively integrate it into the TEN-T trans-European transport network. Formerly I worked at the Mission of Ukraine to the EU in Brussels, where I had the opportunity to address the Eastern Partnership countries, the connection of its transport networks to this network, and I believe that I can use the experience gained as President of the DC in the duties lying ahead of me. As far as Ukraine’s interests are concerned, for us the Danube is part of the road to European integration, because by reforming the water transport sector, modernising our fleet and introducing up-to-date environmental standards, we are approaching our goal – full EU membership – through sectoral integration. At the same time, we will ensure the improvement of our economy and living standards.

A practical example of this is the long-awaited Law of Ukraine on “Inland Waterway Transport”, adopted in December 2020, which restores the cheapest and most environmentally friendly way of transporting goods: river transport. It will improve market competition, increase investment, create new jobs, and shift some freight from road to rivers, relieving roads and reducing their repair costs. There are also promising proposals for connecting the potential of the Dnipro River and the Danube Basin. Unfortunately, the coronavirus pandemic has caused a number of problems that need to be addressed with the active involvement of the committee, such as exchanging crews, extending the validity of ship documents, providing fuel, water and food for ships, organising transhipment in ports, maintenance, protection of crews, and the supply of protective equipment. It is not easy to complete these tasks, to overcome new challenges and obstacles, and it must all be carried out through strategic dialogue between DC member states, via the exchange of technologies, opinions and experiences. The president’s task is to facilitate this activity for the benefit of the states along the Danube. Success depends to a large extent on coordinated work between the organisation’s management, secretariat and the member states. We are ready for the task.

In 2021 Ukraine will commemorate significant anniversaries.

– Ukraine will celebrate the 30th anniversary of the restoration of its independence on the 24th August 2021. I consider my election as President of the Danube Commission and the beginning of this mandate to be special gifts in this symbolic year, after more than 70 years of waiting, which is worthwhile of this turning point anniversary of our state. This year has another important date: the 30th anniversary of the re-establishment of Ukrainian–Hungarian diplomatic relations. As Ambassador of Ukraine to Hungary, I strive for this significant year to bring another achievement for Kiev and Budapest: the restoration of constructive partnerships in all areas and at all levels. I hope we will reach this together with joint efforts.