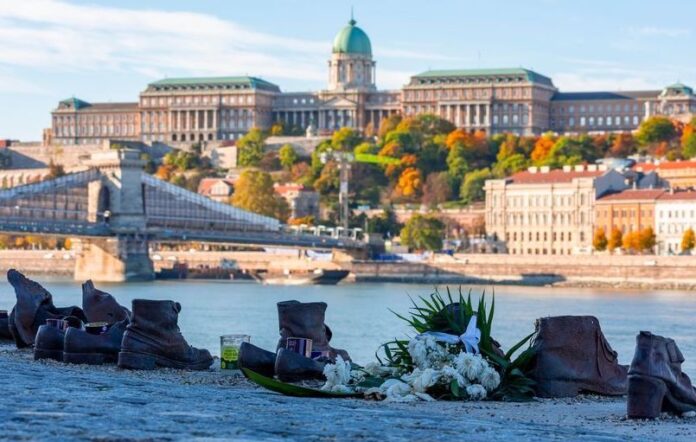 History of Rescuing the Jews of Budapest

As part of the 24th Budapest Jewish Cultural Festival 2022, the Carl Lutz Society, in partnership with the Embassy of Switzerland in Hungary and the U.S. State Department, presents the story of the stunning lifesaving operation that took place in Budapest from 1944 to 1945. Featuring 500 family photos, this exhibition was presented last year in Geneva, Switzerland.

Carl Lutz (1895-1975), who served as Swiss Vice-Consul in Hungary at the Swiss Legation from 1942, started his rescue activity in Budapest in 1944 to save the Jews of the capital, threatened with deportation by the Nazis. At that time, they were the last Jews alive in Nazi-occupied Europe.

Carl Lutz and the Swiss staff in Budapest saved lives thanks to an ingenious system of safe-conduct papers, foreign as well as false documents and 76 Swiss protected safe houses, so they managed to slow down the genocide to some extent until the Red Army arrived. Their task was aided by the fact that the country they served, Switzerland, represented the interests of the United States and the United Kingdom in Hungary.

Along the Danube and next to the Shoes-on-the-Danube Monument, visitors will discover the extraordinary story of the couple Carl and Gertrud Lutz, as well as the Hungarian Jewish resistance, Red Cross delegates and diplomats from other neutral states. Tens of thousands of Hungarian Jews owe their lives to this act of civic courage – unparalleled in modern history.

This exhibition was opened on the 8th September 2022 by Dr. Katrina Lantos Swett, daughter of the late U.S. Congressman Mr Tom Lantos (1928-2008) of Hungarian origin, saved in Budapest during the Holocaust, H.E. Yacov Hadas-Handelsman, Ambassador of the State of Israel to Hungary, H.E. Jean-François Paroz, Ambassador of Switzerland to Hungary, and Mr András Zima, Director of the Holocaust Memorial Centre of Budapest (HDKE).

“We are proud to present this important episode of our collective Hungarian, Swiss, American and Israeli memory”, says Xavier Cornut, President of the Carl Lutz Society. “Our exhibition is held just a few hundred meters from where the story took place, in the middle of this ‘Sanctuary in the Storm’ between Szabadság Square and Pozsonyi Street. It embodies a tribute to the decisive contribution of individuals against barbarism.”

The exhibition was created after extensive historical research using more than 500 original pictures provided by families from Hungary, Romania, Israel, Switzerland and the United States. It is enriched by unpublished testimonies.

“This story is so important to me”, says Agnes Hirschi, stepdaughter of Vice Consul Lutz and Honorary President of the Carl Lutz Society. “It is moving to share this heritage here in Budapest, where I grew up and met my stepfather for the first time.”

A Swiss national figure, Carl Lutz has a room named after him at the Swiss Federal Palace, in Bern, Switzerland. He received honours in Israel, Argentina, Germany and the United States, was elevated Righteous Among the Nations by Yad Vashem, and nominated three times for the Nobel Peace Prize.

It is estimated that tens of thousands of Jewish men, women and children were saved from certain death in Budapest by the Swiss Righteous, Carl Lutz, his wife Gertrud Lutz and his colleagues Harald Feller, Peter Zürcher and Ernst Vonrufs. This is the largest diplomatic rescue operation of WWII. The commitment of this humanist has a scope that goes beyond a historical event. It is a source of reflection and commitment; it embodies values and courage of significant relevance.

In Budapest, Carl Lutz is honoured with a quay named after him (Carl-Lutz rakpart), a monument on Szabadság tér and a memorial next to the Great Synagogue (Dob u. 12). In 2021, the United States named the hall in the elliptical wing of its Embassy on Szabadság Square, where Mr. Lutz used to have his office, the “Carl Lutz Room”.

The exhibition of Carl Lutz Society is bilingual (Hungarian-English), and is supported by the Holocaust Memorial Centre of Budapest (HDKE), the U.S. Department of State and the Embassy of Switzerland in Hungary. Next year, the exhibition will be presented in New York City (USA).

The official opening was accompanied by musical interludes provided by the musicians of “A La Quartet”, and followed by a reception in the “Carl Lutz Room” of the U.S. Embassy in Budapest.

The event concluded with an invitation to the graduation ceremony of the Andrássy University of Budapest, which annually awards the “Carl Lutz Scholarship” to its best students in international relations.

The Carl Lutz Society: supported by the Klarsfeld Foundation and the Tom Lantos Foundation. This Swiss historical society has led educational projects with recognised partners such as Yad Vashem (Jerusalem), the Memorial de la Shoah (Paris) and the George Washington University (Washington, D.C.). It has trained the 340 guides of the State Museum of Auschwitz-Birkenau (Krakow) at the invitation of the latter. It also intervened in schools and teacher training centres in Switzerland and the United States. The Carl Lutz Society was appointed to the support group of the Swiss delegation to IHRA.

The exhibition, dedicated to the memory and unique life-saving operation of Swiss Vice-Consul Carl Lutz, can be visited until 14 October 2022 at Shoes-on-the-Danube Monument in Budapest (on the Pest side, not far from the Parliament).

The film “Carl Lutz – Dangerous Diplomacy” can be seen on YouTube.