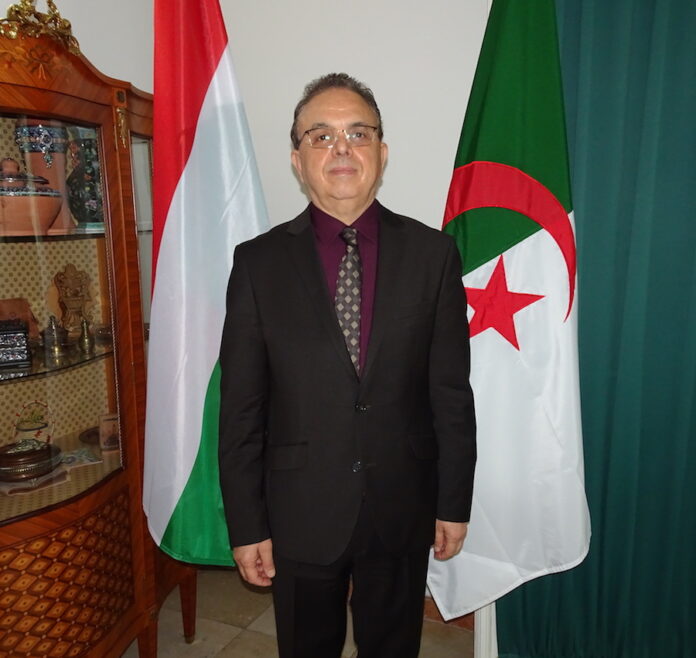 The Embassy of Algeria in Budapest held a commemoration in honour of 8 May, observed as a “Day of Remembrance” in Algeria. In his speech delivered on this occasion, H.E. Mr. Ali Mokrani, Ambassador of the People’s Democratic Republic of Algeria to Hungary said to the invitees:

„In Algeria, just like in other countries, mainly in Europe, the day of 8 May 1945 is commemorated every year. For us, however, this is not a joyful celebration as we recall the terrible events that marked this historic date.

While 8 May is celebrated in other countries as a ’Victory Day’ marking the end of World War II, this day in Algeria is commemorated as a tragic event, the massacre of Algerians by the French colonial forces in three cities in eastern Algeria, Sétif, Guelma and Kherata, claiming the lives of 45,000 people.

It is a real tragedy, a crime against humanity committed by the French colonisers against innocent, unarmed citizens, whose only “sin” was to choose to associate themselves with the celebration of the Victory of the Allies in Europe at the end of WWII, which they perceived as the synonym of regaining liberty for all peoples.

The sole crime of these citizens was that they hoisted the Algerian flag on this occasion without even thinking for a second that they were going to be the target of a savage bloody repression perpetrated by soldiers of the French occupying forces.

In 2020, the President of the Republic H.E. Mr. Abdelmadjid Tebboune decided to declare a ’Day of Remembrance’ in memory of the events of 8 May 1945, which was adopted by the National Assembly on the 23 June 2020, and also initiated of creating a historical documentary TV channel with the aim of educating and informing the new generations about the great moments of the Algerian Revolution launched on 1 November 2020.

The events of 8 May 1945, as a symbol of sacrifice, are considered to be an important milestone in the history of the Algerian armed struggle, which began on 1 November 1954 and gained independence on 5 July 1962.

The solidarity and support were perfectly illustrated by the contribution of the late journalist Alajos Chrudinák, who was committed to the right causes in the world. His works, as well as his fight for Human Dignity and Liberties made him a hero in the eyes of the Algerian people, the same way as martyrs who fell for the country’s independence.

Algeria is a country that appreciates and honours its many friends around the world. This is the reason for the respect towards his legacy and his support for people fighting for their self-determination in Palestine, Western Sahara and earlier in East Timor, Africa and Latin America.

In this regard, due to the important contribution of the late Alajos Chrudinák, the Algerian Ministry of El Moudjahidin (Veterans) decided to award him a Certificate of Recognition and Appreciation, as well as the Symbol of Martyrs, which I have the privilege and honour to present, posthumously to his honourable spouse.

He was a great journalist who interviewed the late Palestinian leader, Jasser Arafat and many other great leaders. He focused his journalism on African justice and made several films on them. He worked at the Diplomatic Magazine between 1998-99, and as editor-in-chief of ‘Panoráma’, the legendary foreign policy programme on Hungarian TV.

By awarding him this certificate of recognition in posthumous circumstances, Algeria is considering him as an eternal friend, a real testimony of friendship and solidarity that exists between the Hungarian and Algerian people.

Therefore, I would like to extend my special thanks to Mrs. Ágnes Chrudinák for her respectful presence here today on this solemn occasion, and my thanks go also to my compatriots and Hungarian friends who share this greatly important remembrance with us.

I also express my thanks and high appreciation to the Hungarian Radio, which – by his emission ‘Voice of Algeria’ broadcast from Budapest in 1956 – sent a loud and clear message about the struggle of revolutionary Algeria against French colonialism.

Today’s ceremony was scheduled to be held right after the death of Alajos Chrudinák, but unfortunately, due to the COVID-19 pandemic it could not be organized until now.

My special thanks go also to Diplomatic Magazine for its respectful presence at this event.

I would like to thank you for your kind attention and let me wish perfect health to all of you. Köszönöm.”