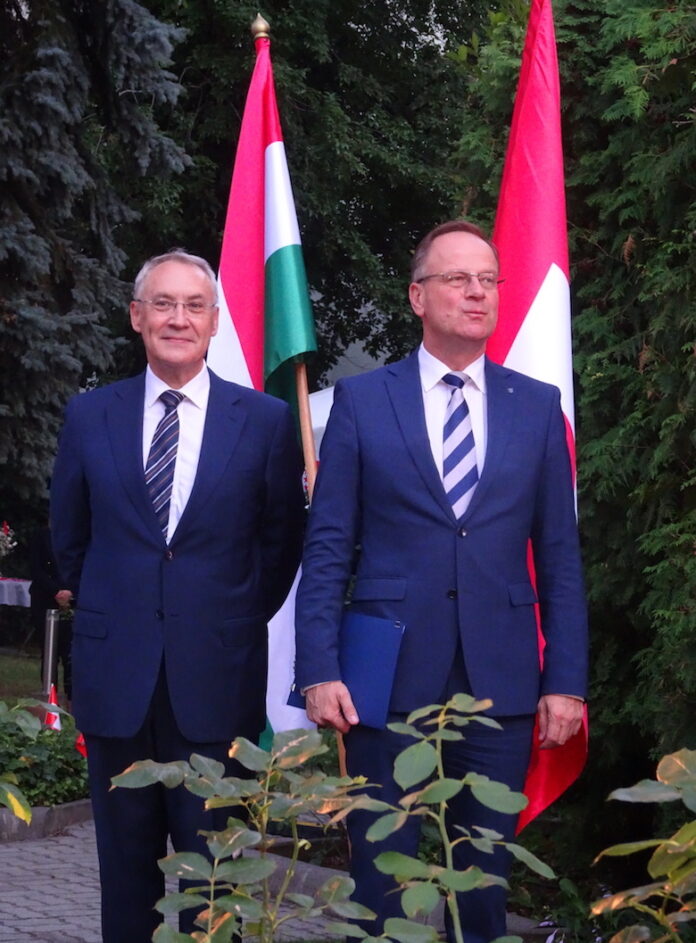 “Switzerland is committed to contributing to the collective historic efforts for a much broader, prosperous Europe”

Edited and photographed by Anna Popper

1st of August has been marked as Swiss National Day since 1891. The day refers to a historic alliance concluded in 1291 by the three Alpine cantons of Uri, Schwyz (where the country’s name comes from) and Unterwalden. They swore eternal allegiance, promising mutual help and signed the Federal Charter (Pacte du Grütli). This treaty of alliance has a high symbolic value, as it is regarded as the foundation of the Swiss Confederation. The Swiss people consider it the origin of their freedom and independence, which was as important as peace.

On the occasion of the 731st anniversary of the founding of the Swiss Confederation H.E. Jean-François Paroz, Ambassador of Switzerland to Hungary and his spouse Dr. Yulia Gusynina Paroz hosted a grand reception in the Residence Garden, adorned with red-white colours of Swiss symbols. The event was attended by hundreds of prominent figures of the Hungarian political, social and cultural life, academic and business circles, members of the diplomatic corps and the Swiss community in Hungary.

In his speech, the Ambassador welcomed the audience and stated:

“Let us celebrate the 731st anniversary of the Swiss Confederation together here in Budapest. I thank you warmly for your presence tonight and I have the honour to welcome you together with my wife and our guest of honour, His Excellency Tibor Navracsics, Minister for Regional Development and Utilisation of EU Funds.

Let’s first listen to the youth wind Orchestra from Tápiógyörgye, performing the Swiss and Hungarian national anthems and the European Union’s Hymn for us. Tápiógyörgye is a twin city of Wünnewil-Flamatt in Switzerland, located not far from our capital Bern. Since 1995, the two cities have maintained an active partnership, which is a symbol of friendship between our two countries.

It is my pleasure to address you tonight on the occasion of the 731st anniversary of the Swiss National Day. On August 1st, we celebrate Switzerland in all its facets. Beyond magnificent mountains, delicious chocolate and ingenious watches, Switzerland is a country with a living democracy, an innovative industry and a pluralist society that actively contributes to peace and prosperity in Europe.

Its rich and diverse culture, high level of prosperity and well-functioning democracy are rooted in fundamental texts such as the Federal Charter of 1291. 731 years ago, this Charter was about a defensive alliance and a pact of mutual assistance. It also expressed the ambition to place the rule of law and protection against violence in the centre of a collective effort to build security and prosperity on the territory of signatory partners. With the “Priests’ Charter” of 1370, the Confederates resolved to protect the physical and legal security of all people living or traveling in the territory of the ancient Confederation. The military alliance had become a project to build a society in which the different groups of political and economic actors agreed on basic principles necessary for peace and prosperity. More than seven centuries later, these principles remain cornerstones of our democracy and our efforts to contribute to a peaceful and prosperous Europe.

Today in Europe, at a time when a war of aggression is raging in a neighbouring country, European countries, EU Members States and partners like Switzerland are similarly striving for peace, harmonious co-existence of peoples, and prosperity on the continent. The free flow of goods that took place in the Middle Ages between Zurich and the Gotthard, as an objective of the old Confederates, now takes places for instance here in Hungary, on the Hungarian highways as part of a unique contemporary historic effort for a much broader, prosperous Europe. Switzerland is committed to bringing its contribution to this collective effort. The bilateral agreements between my country and the EU have resulted in a win-win situation.

Let us look at some figures:

According to Eurostat figures, the EU derived a surplus of around 34 billion Euros from trade in goods with Switzerland in 2020. This shows quite clearly that access to the Swiss market as part of the EU single market is of substantial value for the EU (in Switzerland we put some kirsch in the fondue, but do not practice “cherry picking” that much…)

At the same time, Switzerland is one of the main contributors to the free circulation of persons (or freedom of establishment) in Europe: in 2020, more than one million four hundred thousand EU/EFTA citizens were living in Switzerland, making up around 16.5% of the entire Swiss population. In comparison, the average percentage of EU/EFTA citizens from other EU countries is only 4% of the total population, with 5% in Germany and 2% in France and Italy. Among EU members, only Luxembourg has a higher percentage than Switzerland (38%).

We cannot build a strong and prosperous Europe by applying punitive measures, such as Switzerland’s exclusion from the Horizon Europe research scheme, only because the envisaged framework agreement between Switzerland and the EU has failed. We must strengthen our cooperation within Europe and not reduce it.

Between 2007 and 2017, Switzerland and Hungary implemented successfully a cooperation program to reduce economic and social disparities in Europe. This year, in 2022, a new Swiss – Hungarian cooperation program will be launched as part of the second Swiss contribution to reducing social and economic disparities in Europe. Of the 1.3 billion Euros contribution, a share of 86 million Euros will be allocated to projects realised in Hungary in partnership with the Hungarian Government. The Swiss Embassy has been reinforced and a new Swiss Contribution Office, headed by Director Roland Python, will collaborate closely with the National Coordination Unit of Hungary to ensure a successful implementation of the Hungarian programs in cooperation with the various project managers.

It is therefore a great honour for me to invite His Excellency Minister Navracsics to reflect on developments in Europe and in our bilateral relations.”

In his remarks, Minister Navracsics, responsible for Regional Development and the Utilization of EU Funds, thanked the invitation of Ambassador Paroz to this notable event, which provides an opportunity to welcome the progress of the Swiss-Hungarian Cooperation Program. He reminded that Hungarian-Swiss diplomatic relations date back to 1918 and had emerged stronger over the century. Referring to the Swiss-born industrial entrepreneur Abraham Ganz, who made heavy industry a success in Hungary in the 19th century, he said that in the 21st century we continue to develop in success the Swiss-Hungarian ties for small and medium size companies too. “Creating synergies with EU programs will also be one of our priorities. Thank you for the active cooperation. I hope that by early autumn we can convene again to celebrate the ratification of the bilateral agreement” – the Minister concluded.

The guests enjoyed the pleasant atmosphere of the evening in a green, beautifully decorated setting, the generous hospitality, the fine Swiss specialities, including Raclette and other excellent dishes and drinks, while listening to live music by an outstanding band.

Kurultaj 2022 – Assembly of the Hungarian Tribes