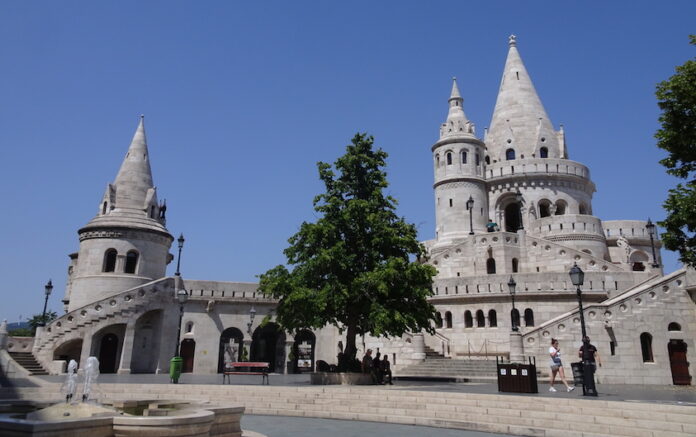 Budapest is a UNESCO World Heritage Site, with the two banks of the Danube, the elegant Andrássy Avenue and the medieval Buda Castle quarter, which includes one of the most visited attractions of the Hungarian capital: the Fisherman’s Bastion (Halászbástya, in Hungarian). It was built on the Buda Castle Hill, the best place to enjoy the beautiful views of the whole city. And after sunset, it is particularly spectacular, thanks to the illumination of the city’s landmark.

From the medieval times to the 19th century, solid walls surrounded the royal castle and the town, along with the site of today’s Fisherman’s Bastion, which never served defence purposes. It was designed as a panoramic view terrace, a perfect lookout point in any weather and also to enhance the beauty of the nearby Matthias Church. The T-shaped bastion was built in Neo Romanesque style by Frigyes Schulek, who was greatly inspired by the medieval architecture. After seven years of construction, it was completed in 1902, dedicated to the 1000th anniversary of the Hungarian Conquest of the Carpathian Basin, celebrated in 1896. And to feel more like history, the architect added 7 towers to the terraces, featuring the 7 Hungarian tribes and chieftains of the Magyars who settled down here in 896 AD.

The construction of the Fisherman’s Bastion was intertwined with the restoration and redesign of the Matthias Church (Church of Our Lady) by architect Schulek. It was also part of a huge investment and development process taking place between 1890-1920 to make the cosmopolitan Budapest a wonderful European-style city in Central Europe.

The royal city atop the Castle Hill (Várhegy) was always protected by castle walls, and its various sections were defended by the castle guards, the royal arms and the residents of the castle. Some historians say that this particular part of the walls was protected by the guild of fishermen, who lived in the little Water Village between the Danube and the castle walls. In times of peace they fished and sold their catch at the fish market on the square in front of the church, in times of danger they took their due part in protecting the inhabitants living in the Castle District.

The tallest tower of the Fisherman’s Bastion is named after an important historic figure, the Grand Prince Árpád (895-907), founder of the Árpád dynasty, the Hungarian kings descending from him ruled until 1301.

The Árpád Tower houses the famous Halászbástya Restaurant, which was beautifully restored according to the original design of Frigyes Schulek.

No surprise that it became one of the favourite restaurants of H.E. Carmenza Jaramillo, Ambassador of Colombia to Hungary, highly valuing the unique setting of the restaurant, its elegance, refinement and special atmosphere, enjoying its innovative cuisine that offers gourmet culinary experiences, while hosting several dinners, inviting diplomats, politicians, businessmen, artists and friends, in the spirit of the famous words of Lord Palmerston, former British prime minister and three-time foreign minister: “Dining is the Soul of Diplomacy”.

Food has played a considerable role in the history of diplomatic practice over the centuries, communicating culture, identity and messages expressing friendship as a powerful tool to win hearts and minds. Countless diplomatic discussions took place with good meal and drink at well-dressed dining tables. It brings people together, and the dining table provides an excellent setting to develop cordial and fruitful relationships with others.

We can only agree with the Ambassador’s choice and the memorable slogan of Halászbástya Restaurant: “There are a few places like this in the world…”