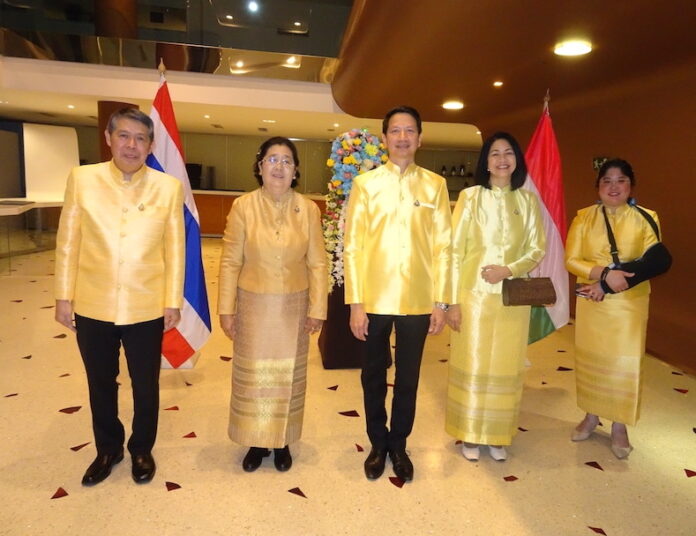 On the occasion of the Thai National Day, which is held annually on the 5th December, H.E. Mr. Nipon Petchpomprapas, Ambassador of the Kingdom of Thailand to Hungary and Mrs. Wattana Petchpomprapas hosted a grand reception at the glamorous Anantara New York Palace Hotel, an architectural jewel from Europe’s Golden Age in Budapest, owned by a Thai company.

The celebration was attended by members of the diplomatic corps, high officials of the Hungarian political and cultural life and business sector, including the guests of honour: Ms. Katalin Bihari, Deputy State Secretary for External Economic Relations from the Ministry of Foreign Affairs and Trade, Mr. István Jakab, Deputy Speaker of the Hungarian National Assembly, Dr. István Simicskó, Chairman of the Hungary–Thailand Friendship Group and Thai nationals living in Hungary.

After the Thai and Hungarian National Anthems were played by Emmy-Awarded Hungarian violinist, Mr. Vilmos Oláh and the orchestra of Hungarian musicians, the Ambassador took the floor and addressed the audience:

“Welcome to the National Day Reception of Thailand. Beside the Guests of Honour, I would like to acknowledge the presence of other distinguished members of the Hungarian National Assembly: Ms. Timea Szavó, Mr. Peter Balassa, Mr. Zoltan Vajda, members of the Hungary–Thailand Parliamentary Friendship Group.

5th December marks three important occasions for Thailand: the Birthday Anniversary of His Late Majesty King Bhumibol Adulyadej The Great, the Thai Father’s Day and the National Day of Thailand.

Even though H.M. King Bhumibol Adulyadej passed away six years ago, His Majesty is still long remembered by Thai people from all walks of life for his dedication to improve the livelihood of Thai citizens. His legacy has still lived on in the thousands of royally-initiated development projects in various fields throughout Thailand. During his 70 years on the throne from 1946-2016, Thailand had been transformed beyond recognition. From an under developed country in the 1940s, the Kingdom has become an upper middle-income nation with successive economic growth.

His Majesty King Maha Vajiralongkorn, who ascended to the throne in 2016, has built upon the legacy of his father. His Majesty has nurtured, conserved and extended royal development projects and initiatives, started by his father in various areas, such as in agriculture, public healthcare, education, water management, and conservation of natural resources.

The year 2022 is a rebounding year for Thailand. The Thai economy is recovering rapidly with a growth rate of 3.3%, driven mainly by the regaining tourism and export sectors. Thailand has received favourable rankings by the international media. The U.S. News ranks Thailand the 28th Best Country in the world and the 5th in Asia. While the Condé Nast Traveler Magazine awards Thailand the 3rdTop Country and Bangkok the 4th Best City to visit.

Thailand and Hungary have enjoyed close and cordial relations since the establishment of our diplomatic ties in 1973. Our relationship can be traced back 125 years ago when His Majesty King Chulalongkorn, the great grandfather of our present king, visited Hungary in 1897. Since then, there were visits to Hungary by another three kings, including His Majesty King Maha Vajiralongkorn in 1989, as Crown Prince.

The Thai side were honoured to have the opportunity to welcome visits to Thailand by a number of high-level delegations from Hungary: including H.E. Dr. Tamás Sulyok, President of the Constitutional Court, and H.E. Mr. István Jakab, Deputy Speaker of the National Assembly in 2020. The most recent one was led by H.E. Peter Szijjártó, Minister of Foreign Affairs and Trade, on the 29 September 2022. On that occasion, the Foreign Ministers of both sides discussed our multi-dimensioned relations and signed an MoU on cooperation between the Diplomatic Academies of the two countries. Thailand and Hungary have fruitful cooperation in many areas.

In the area of trade, our annual two-way trade value is about 700 million US dollars with a bright prospect for expansion. As for investment cooperation, now there are two major Thai companies investing in Hungary. Thai President Foods Company runs a factory in Esztergom, producing “MAMA and Thai Chefs” brands of instant noodles for European markets. The Anantara New York Palace Budapest is owned by the MINOR International Group from Thailand.

In February 2022, Thailand hosted the 2nd Thai-Hungarian Joint Steering Committee on Water Resources Management. Then in June the 3rd Session of the Thai-Hungarian Joint Commission on Economic Cooperation was organized in Bangkok. Among results of those meetings, both sides agreed to set up a 3-Year work plan on cooperation in water resource management, to set a 1 billion USD target of the two-way trade within the next few years.

Thailand has taken part in the Stipendium Hungaricum Scholarship Program, under which Hungary has kindly granted scholarships to Thai students since 2018. The celebration of the 50th Anniversary of diplomatic relations between Thailand and Hungary in 2023 would therefore be a good opportunity to build upon and further strengthen the existing relations between our two countries and peoples in the many years to come.

May I now propose a toast to the health and happiness of Her Excellency Katalin Novák, President of Hungary and His Majesty King Maha Vajiralongkorn as well as for the lasting friendship between Thailand and Hungary.”

The official ceremony was followed by a concert of the music pieces composed by His Late Majesty King Bhumibol Adulyadej, The Great, performed by Mr. Vilmos Oláh and Hungarian musicians.

During the reception the guests were served with a rich variety of Thai savoury dishes and sweet delicacies, supported by CPF Europe and Red Bull GmbH.