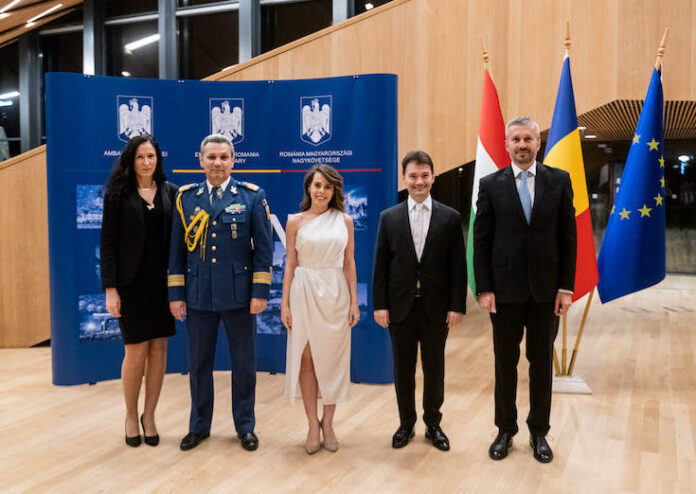 On the occasion of the Romanian National Day in 2022 and 20 years after the signing of the Declaration of Strategic Partnership for the 21st Century Europe between the Government of Romania and the Government of the Republic of Hungary, H.E. Mr Gabriel Șopandă, Ambassador of Romania to Hungary hosted a reception in the Grand Hall of the National Dance Theatre, situated at Millenáris Park in Budapest, attended by members of the diplomatic corps, representatives of Hungarian social, cultural and business circles, as well as Romanian nationals from their large community in Hungary.

The celebration started with the National Anthems of Romania, Hungary and the EU, followed by the speech of the Ambassador:

“On the 1st December, Romanians celebrate National Day, one of our most important historical moments, which has enshrined Romania’s commitment to the principles of tolerance, mutual respect and living together in peace.

Romania, in its historic border assumed as an act of will of the Romanian people, has embraced the values of equity, tolerance and respect towards all nationalities. The Romanian unitary state has undertaken considerable efforts to discourage or remove conflictual and revanchist mentalities by providing an example of tolerance and respect – values that are currently constantly being promoted in our foreign policy.

Today’s Romania is a mature state, enjoying solid economic and cultural ties with all its neighbours, consistency and credibility within the EU and NATO, is actively involved in consolidating the European project and having a dynamic and stable economy. Romania ensures very high standards as regards the involvement of national minorities in the political and cultural life, being thus entitled to look with satisfaction to the past and with confidence toward the future.

We celebrate 20 years since the signing of the Declaration of Strategic Partnership between the Government of Romania and the Republic of Hungary for 21st Century Europe in Budapest. The positive atmosphere from the signing in 2002 was recalling the fact that the reconciliation between Romania and Hungary had to lead to the establishment of a true Strategic Partnership for the benefit of the Romanian and Hungarian citizens. From Romania’s perspective, this objective is still valid. It is the duty of the authorities in our countries to undertake measures in order to bring this goal to life.

The consolidation of bilateral dialogue and cooperation remains the pillar of the commitment of the Romanian authorities, interested in cooperation with Hungary, an important neighbouring country, taking place under the best circumstances and having a positive dynamic of development and deepening to the benefit of the citizens from both states, regardless of their ethnic origin.

The current context and the recent enhanced cooperation give us the guarantee that we can make our bilateral dialogue more efficient and provide more substance to the Strategic Partnership, especially in the economic area, but also in the political one.

Trade remains an important pillar of bilateral relations, with a volume of over 11 billion Euros in 2021. Hungary is at the top of Romania’s trading partners: it ranks 4th in exports and 3rd in imports.

The historical Romanian community in Hungary plays an important role in keeping Romanian identity alive and consolidating the links between the two countries.

In the international context marked by asymmetric threats and multidimensional vulnerabilities, Romania is a promoter of peace, justice and long-term development, a fact proven by its role as defender of human rights, the rule of law, the values of democracy, international law, multilateralism and understanding between nations.

Since 24th February 2022, Ukraine and the Ukrainian people have had to face illegal, premeditated and unjustified aggression initiated by the Russian Federation. Ukraine and the Ukrainian people at these moments need the full support that can be provided by the democratic community sharing the same values: freedom, dignity, respect of the rule-based international order, the sovereign right of every state to freely decide its future.

From the first moment, Romania and the Romanians have stood beside Ukraine and the Ukrainian people. We will continue to support Ukraine, just as we have done so far, with all our resources and capacities at all levels. Over 2,8 million Ukrainians have crossed borders and almost 90.000 of them are currently housed on our territory. More than 3,000 Ukrainian kids study in our schools, more than 3,000 Ukrainians are employed by Romanian companies.

Romania continues to play an essential role in ensuring the transit and export of grain from Ukraine, and consequently in stabilizing the global food chain, deeply disturbed by Russian aggression. So far, over 6,5 million tons of Ukrainian grain have been transported through Romania and with Romania’s support by means of our harbours to the Black Sea and to the maritime section of the Danube.

The rapid changes in our neighbourhood have led to the acute awareness of the fundamental importance of good cooperation between neighbouring states, considering our mutual interest in ensuring regional security and preventing the escalation of conflict.

Together with the Embassy team and the colleagues from the Consulates General in Szeged and Gyula, as well as the Romanian Cultural Institute, I am honoured to represent Romania in Hungary.

Thank you for being here tonight with us to celebrate the National Day of Romania. I also want to thank our sponsors whose generosity made this event possible.”

The official part was followed with a piano concert by the famous Romanian artist, Constatin Sandu, who performed pieces from great composers such as Franz Liszt, Paul Constantinescu, George Ligeti and George Enescu.

After the concert, which was warmly hailed by the audience, a rich buffet reception awaited the guests with fine specialities of Romanian gastronomy and excellent wines.

In 2022, Romanian diplomacy celebrated the 160th anniversary of the establishment of the Department of Foreign and State Affairs, on 27 July 1862. On this occasion, the Minister of Foreign Affairs of Romania, Mr Bogdan Aurescu sent a message, representing 27 July as the progress of Romanian foreign affairs throughout history:

“160 years of modern Romanian Diplomacy – 160 years of concrete and valuable contribution to the creation, continuance and development of Romania’s international relations, to the democratic path of the Romanian state, 160 years of service in the defence of the interests and security of Romanian citizens, wherever they may be.”

“Despite historical difficulties, the Ministry of Foreign Affairs has always acted as a vector for Romania’s modernisation and progress. Romanian diplomacy will continue to support and promote democratic values, stability and security in the region and globally, strict respect for international law and rules-based international order, effective multilateralism. The benchmarks of foreign policy remain the strengthening of our country’s influence in the EU and NATO, the development and deepening of the Strategic Partnership with the USA.”

“The Ministry of Foreign Affairs will continue to fulfil its duty towards Romanian citizens. It will do so by keeping as a benchmark the work of diplomats who contributed to the foundation and shaping of a united and modern Romania, through diplomatic conduct and action dedicated to the same fundamental goal: protecting and promoting the values, interests and objectives of our country and the welfare and security of our citizens” – the Minister stated.

Source: Embassy of Romania in Budapest