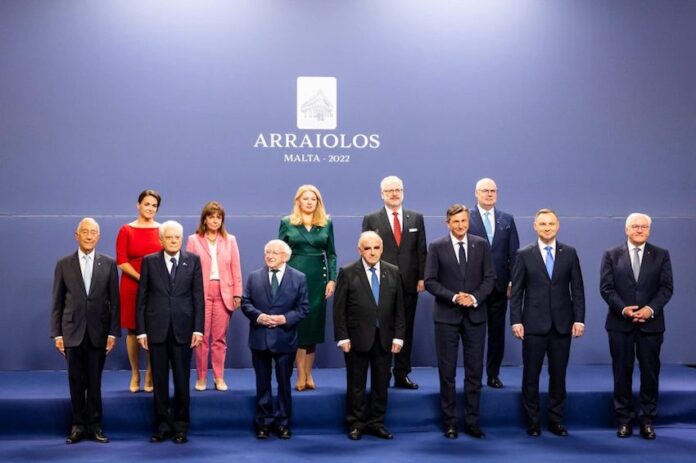 “During our sessions, we spoke openly and frankly, like one would do with trusted partners”

On the invitation of H.E. George Vella, President of Malta, Heads of State from 13 countries held high-level talks in Malta on the 6th October 2022 in one of the historic buildings of Valletta, the former Sacra Infermeria, today the Mediterranean Conference Centre, where various issues were discussed on a global scale.

The so-called Arraiolos Group is composed of the Heads of State of Austria, Bulgaria, Croatia, Estonia, Finland, Germany, Greece, Hungary, Ireland, Italy, Latvia, Malta, Poland, Portugal, Slovenia, and, for the first time, they were joined by the President of Slovakia. The formation brings together heads of state from European Union member states, who do not have exclusive executive powers.

The Arraiolos Group first met in 2003 in the town of Arraiolos, situated in the Évora District of Portugal, with the participation of six presidents, hosted by the former Portuguese President, the late Jorge Sampaio, who passed away in 2021. Way back in 2003 the issues that led to the convening of the first meeting were the preparations for the Enlargement of the EU. Malta was one of the 10 states that joined the EU in 2004, so 2003 marked the eve of this substantial enlargement. The Group will celebrate the 20th anniversary since its establishment in Portugal in 2023.

Since then they have held regular annual meetings on a variety of topics. The Arraiolos meeting has no particular fixed agenda and discusses a range of issues in a forum that permits the Presidents to speak freely. There is no final declaration of the meeting’s conclusions.

Speech by President George Vella during joint press statements at the end of Arraiolos Malta 2022:

“I wish to thank all the members of the media present for this Joint Press Conference. According to Arraiolos tradition, all the heads of state present are invited to share their views and thoughts on the discussions we held during the course of the day.

Let me begin by thanking my colleagues for attending this meeting in Malta – the 17th since the formation of this Group in the year 2003.

I am sure to be speaking on behalf of all my colleagues when I warmly welcome the addition of the Slovak Republic to this Group. President Zuzana Čaputová, thank you for joining us for the Malta Arraiolos.

My engagements with my guests started last night (5 October) when I met informally with those heads of state who had already arrived in Malta. Our official deliberations today started with a first working session in which we assessed the role of the European Union and its members in the face of challenges and threats.

We of course touched on the war in Ukraine and the wide-ranging consequences it has brought on all our countries, and the international community at large, not least its effects on the energy sector, rising commodity prices and the destabilising impact on our economies.”

“I take this opportunity to reiterate my outright condemnation of this unjustified and inexcusable war by Russia against Ukraine. No words are enough to condemn this atrocious disregard of international law and lack of respect for national sovereignty.

I also spoke to my colleagues about the worrying developments in Malta’s immediate neighbourhood, the Mediterranean, and stressed the need for the international community to keep these developments high on its agenda. I brought to the table the issue of irregular migration on the Central Mediterranean route and reiterated my calls for solidarity with frontline countries being put into practice.

Later on, during the second working session we discussed ways in which we could and should diminish global disparities and social injustices. We had a close look at the situation within the EU, and also reflected on its role in addressing disparities on a global level. In my intervention, I elaborated on the importance of effective Development policies, the role of women and youth in ensuring access to basic needs such as food, health, education, energy, and mobility.

In this context, reference was also made to the courage and the determination being shown by women in Iran, fighting off repression to achieve basic rights and fundamental freedoms.

During both sessions, we spoke openly and frankly, like one would do with trusted partners.

While we may not have found immediate solutions to the threats and challenges around us, I am sure that the concerns and proposals we exchanged amongst us, have contributed greatly to understanding each other’s positions and perspectives. Prior to the plenary meeting, I had very fruitful meetings with the presidents of Hungary and Slovenia. And I will also be meeting with more colleagues, hailing from Germany, Greece, Portugal, and Ireland.

I thank my colleagues for their active engagement during our discussions. And I have to say that it is indeed an honour and a pleasure to host you all for this Arraiolos Meeting. I am looking forward to meeting you all again for the Official Dinner that will bring the Malta Arraiolos to its conclusion. I would like to take the opportunity to thank the members of the local and international media for having followed our proceedings.

My special thanks go to the staff at my office for the huge task they have undertaken in organising this conference. I also thank the large number of other officials from various departments, too numerous to mention, who have made this conference possible. They deserve our appreciation.

The 17th Arraiolos Meeting is now over. We look forward to our next meeting in Portugal – where it all began 20 years ago. I am sure that our colleague President Marcelo Rebelo de Sousa will be an excellent host and I assure him of our full cooperation as outgoing hosts. I wish all delegations a safe journey back home. Thank you very much.”

Source: Office of the President of Malta